UNHCR/B. Sokol
Malian refugees, carrying their belongings, approach UNHCR vehicles that will carry them to a camp in Burkina Faso. This was one of the major population displacements of the year.
20 December 2013

The first half of 2013 is described as “one of the worst periods for forced displacement in decades,” by the Mid-year Trends 2013 report produced by the UN High Commissioner for Refugees (UNHCR).

Some 5.9 million people were forced to flee their homes in the first six months of the year, compared with 7.6 million for all of 2012. The biggest producer of new displacement was Syria.

There were also more than 450,000 asylum applications, although this was about the same levels from the same period a year ago, said UNHCR.

“It is hard to see such numbers and not ask why so many people are today becoming refugees or internally displaced,” said António Guterres, UN High Commissioner for Refugees.

“Humanitarian organizations deliver life-saving assistance, but we can’t prevent or stop wars – that requires political effort and political will and this is where much more concerted international focus needs to be placed.”

Globally, forced displacement – at 45.2 million as of the end of 2012 – is already at its highest level since the early 1990s due overwhelmingly to an escalation of new conflicts, the agency noted.

UNHCR also said that 189,300 refugees returned to their countries of origin during the first six months of 2013, while 33,700 were resettled in third countries. Some 688,000 IDPs returned home in countries where UNHCR works in IDP situations.

♦ Receive daily updates directly in your inbox - Subscribe here to a topic.
♦ Download the UN News app for your iOS or Android devices.
Displace 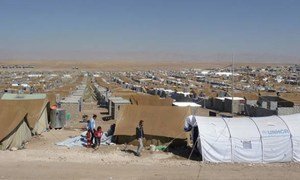 A United Nations report released today says that more people are refugees or internally displaced than at any time since 1994, with the crisis in Syria having emerged as a major new factor in global displacement.