19 December 2013
Unknown assailants attacked a United Nations base in South Sudan today, possibly killing or injuring civilians who had sought refuge inside during violent clashes between Government forces and rebels, with the number of people fleeing to UN installations now reaching 35,000.

Secretary-General Ban Ki-moon said he was “appalled” to learn of the attack on the UN Mission in South Sudan (UNMISS) base in Akobo and demanded that Government and opposition forces respect the rights of civilians and ensure their safety and security.

“UNMISS is doing everything it can, within its means and in a very fluid situation, to protect civilians, as well as United Nations and international personnel on the ground,” a statement issued by Mr. Ban’s spokesperson said. “There are indications that civilians may have been killed and wounded in the attack, but this remains to be verified. Should these reports prove true, those responsible must be held accountable for their crimes.”

At the time, 43 Indian peacekeepers, six UN police advisers and two UN civilian staffers were present at the base. About 30 South Sudanese had sought shelter from the turmoil plaguing areas of Akobo County, the Mission said in a statement.

Overall UNMISS has over 6,800 troops and police in the country, which gained independence after seceding from Sudan less than three years ago and has been thrown into turmoil since Sunday when, according to media reports, President Salva Kiir’s Government said soldiers loyal to former deputy president Riek Machar, dismissed in July, launched an attempted coup. Hundreds of people have been killed since then, according to reports.

“The future of this young nation requires its current leadership to do everything possible to prevent South Sudan descending into the chaos that would be such a betrayal of the ideals behind its long struggle for independence,” said Mr. Ban’s statement, issued only hours after Deputy Secretary-General Jan Eliasson warned of the potential for even greater turmoil.

“Violence is spreading and could spread even further and we need all South Sudanese leaders and political personalities now to immediately appeal [for] calm and call on their supporters to suspend hostilities,” Mr. Eliasson told a news conference at UN Headquarters in New York. “Political dialogue is the only way to prevent further escalation.”

In a statement strongly condemning the attack, UNMISS said it is doing everything possible to ascertain the circumstances on the Akobo base and secure the safety of its personnel who remain there, adding that it plans to dispatch aircraft early on Friday morning to evacuate UN personnel.

“The Mission fully expects all forces, whatever their allegiance, to ensure the safety of UNMISS personnel and any civilians located inside Mission premises,” it added.

UN spokesperson Farhan Haq said the Government has reported to UNMISS that there has been youth mobilization and movement towards its base in Bor, in Jonglei state, where it is sheltering over 14,000 civilians. Mr. Ban’s Special Representative in the country, Hilde Johnson, remains in constant contact with the Government and others over the situation, he added.

Mr. Eliasson stressed that UNMISS, with over 6,800 troops and police, has civilian protection as part of its duties, “and we take that mandate very seriously, particularly in this situation when, clearly, civilians are in danger,” he said. “And we will do our best to protect them in the compounds and bases where they are now housed. And we will try to also make sure that they have provision of basic relief.”

Earlier in Geneva, UN High Commissioner for Human Rights Navi Pillay said an estimated 20,000 people, mainly women and children, are still camped at UN premises in Juba. Others are reported to be leaving the town in fear of attack by rival groups, in what she called a rapidly deteriorating security situation.

“We have received reports of civilians killed in Juba based on their ethnicity,” she added. “I call on the Government to send a clear message on command responsibility within the SPLA (South Sudanese Army) to prevent retaliatory attacks based on ethnicity and tribal affiliation and to hold the alleged perpetrators accountable,” she added.

“I am deeply worried about the safety and security of civilians caught in the crossfire. The risk of seeing the fighting taking on an ethnic dimension is extremely high and could result in a dangerous situation,” Ms. Pillay said, voicing “extreme concern” for people arrested by the Government and reports of numerous extra-judicial killings, and urging the authorities to clarify the whereabouts of at least 10 former senior government officials arrested in Juba two days ago.

“I urge the Government to ensure that all those detained are accorded due process and that they are promptly either charged or released.”

Mr. Eliasson welcomed reports today Mr. Kiir is willing to enter into talks and deplored the call by some from former deputy president Machar camp to topple the Government. Yesterday, Mr. Ban and the Security Council called on all parties to immediately cease hostilities and exercise restraint to prevent the further spread of violence. 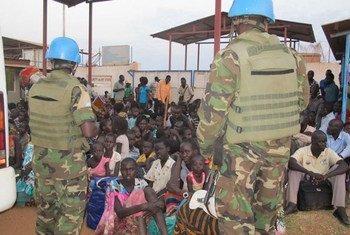 18 December 2013
Amid the ongoing fighting in South Sudan, Secretary-General Ban Ki-moon is reaching out to key leaders in the region seeking a political end to the crisis, while the Security Council has urged all parties to immediately cease hostilities and exercise restraint to prevent the further spread of violence.