Developing Asia-Pacific countries will face another year of subpar growth in 2014 due to slow recovery, policy uncertainty and protectionism in developed countries, marking the first time in two decades that their economies have grown at less than 6 per cent annually over a three-year period, according to a United Nations forecast released today.

“Asia-Pacific developing economies face the prospect of a ‘new normal’ of lower growth in the coming years, underlining the need for forward-looking macroeconomic policies and intraregional cooperation,” said the UN Economic and Social Commission for Asia and the Pacific (ESCAP) Director of Macroeconomic Policy and Development Division, Anisuzzaman Chowdhury.

Domestic structural impediments, such as growing inequality, also play a role in the slower growth. The developing economies are forecast to grow 5.6 per cent in 2014, up from 5.2 per cent this year, but lower than the 6 per cent earlier forecast for 2013, according to ESCAP’s Economic and Social Survey of Asia and the Pacific 2013: Year-end Update, released in Bangkok, Thailand.

For the three years between 2012 and 2014 developing Asia-Pacific economies are averaging 5.4 per cent growth annually compared to 8.4 per cent during the pre-crisis years of 2002-07, the first time in at least two decades that they are growing so slowly over such a time-fame.

“The manner in which the current transition is managed will have a long-term impact on the region’s inclusive and sustainable development path,” ESCAP Executive Secretary Noeleen Heyzer said. “The economies of Asia and the Pacific are at a turning point.”

The key economies of China, India and Indonesia with large domestic markets grew moderately in 2013 after recent years of strong performance, although China’s economy is still growing relatively fast at 7.5 per cent in 2013 and is projected to expand by 7.3 per cent in 2014. India’s growth is expected to rebound in 2014 to 6 per cent after remaining unchanged at around 5 per cent in the preceding two years.

Indonesia has recorded the lowest growth in recent years, estimated at 5.7 per cent in 2013 after expanding at 6.2 per cent in 2012. Growth dynamism in other major economies with significant domestic markets such as Malaysia and Thailand has also been affected, with gross domestic product (GDP) growth slowing to 4.5 and 3.2 per cent respectively in 2013, from 5.6 and 6.4 per cent in 2012.

Expected major monetary policy developments in the United States could also affect growth in the region. ESCAP estimates show that a cutback in quantitative easing by the US Federal Reserve, known as ‘tapering’, could slash GDP levels in Malaysia, the Philippines, Russia and Thailand by up to 1.2 to 1.3 per cent in 2014.

The continued slowdown in developed economies and limited progress in multilateral trade deals has seen the rise of protectionist policies in developed countries, which are significantly affecting Asia-Pacific growth.

The Update estimates that such policies kept out $62 billion worth of regional exports in 2012 and 2013, translating into a loss in developing Asia-Pacific GDP of over 0.4 per cent.

It stresses improved access to decent and productive employment as key to reducing rising economic and social inequality, a major constraint to realizing the full economic potential of the region.

The Update reiterates the need for productive public spending to promote inclusive and sustainable development, targeting the majority rural population in the region with an estimated 762 million people dependent on agriculture for a livelihood.

♦ Receive daily updates directly in your inbox - Subscribe here to a topic.
♦ Download the UN News app for your iOS or Android devices.
ESCAP

Economic growth must be harmonized with natural environment: UN conference 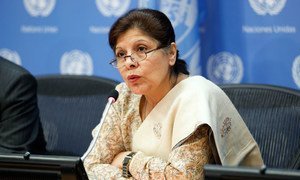 Secretary-General Ban Ki-moon has appointed seasoned economist Shamshad Akhtar of Pakistan as the new head of the United Nations Economic and Social Commission for Asia and the Pacific (ESCAP).