19 December 2013
The President of the General Assembly today encouraged the United Nations to honour Nelson Mandela “by letting his legacy live on” in the world body’s continued struggle against poverty, injustice and the destruction of the human person and human spirit.

“Let us remember that we can also be like him – because we too can choose the better way, choose to work toward those causes that are greater and better than our narrow interests,” John Ashe said during a special meeting convened at UN Headquarters in New York to give Member States an opportunity to pay tribute to the former South African leader who passed away on 5 December at the age of 95.

The Assembly President urged UN representatives to remember that “we too must work together to reduce hunger and injustice, to build lasting peace and sustainable development, to stop genocide and combat hatred.”

Mr. Mandela addressed the General Assembly as the first democratically elected President of South Africa in October 1994, but he spoke to a UN audience for the first time on 8 June 1990 in a speech to the UN International Labour Organization (ILO) as the Vice-President of the African National Congress (ANC).

“Despite the thickness of the prison walls, all of us in Robben Island and other jails could hear your voices demanding our release very clearly. We drew inspiration from this,” said Mr. Mandela just eight months after he had been released from 27 years in prison.

“We thank you that you did not tire in your struggle. We thank you for your sense of humanity and your commitment to justice which drove you to reject the very idea that we should be imprisoned and that our people should be in bondage,” Mr. Mandela added.

Secretary-General Ban Ki-moon, who was among the other senior UN officials speaking at today’s event, said that from its earliest days, the General Assembly took on the poison of racial discrimination. “Through the years, the Assembly used every tool, including sanctions, embargoes and diplomatic isolation to bring about change,” he added.

The UN chief said that through his extraordinary life, Mr. Mandela showed that tyranny and oppression never have the last word. “That is the heritage of hope he bestowed on each and every one of us. That is our inheritance,” said Mr. Ban.

“Now it is our duty to build the better world that he showed is within our grasp. Let us follow his rainbow,” said Mr. Ban, who was among the thousands of rain-soaked participants at Mr. Mandela’s official memorial in Johannesburg. “Today and every day, let us be inspired by his passion, his compassion, and his undying conviction in the human spirit and the global good.”

Since 2009, the General Assembly has recognized Mr. Mandela’s contribution to the culture of peace and freedom by encouraging people to devote 67 minutes to helping others – by volunteering in a hospital, tutoring a child, providing food for the homeless, or any other community service.

The 67-minute campaign – ‘Take Action – Inspire Change’ – is based on people devoting one minute of their time for every year that Mr. Mandela devoted to public service, as a human rights lawyer, a prisoner of conscience, an international peacemaker and the first democratically-elected President of post-apartheid South Africa.

The campaign is marked every 18 July, known as “Nelson Mandela International Day.” Mr. Mandela is the only person for whom the Assembly has been granted such an honour. 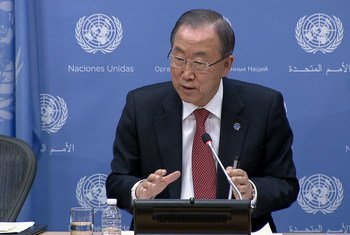 16 December 2013
With 2013 marked by a deterioration “beyond all imagination” in the Syrian conflict and the “imminent danger of mass atrocities” looming in the Central African Republic (CAR), Secretary-General Ban Ki-moon today called on world leaders to follow the example of the late South African President Nelson Mandela in making 2014 the year of protecting people.