Despite volatility and uncertainty, Afghanistan continues to make progress in enhancing its stability as the drawdown continues for the international forces that have sought to bring security there for the past 12 years, the top United Nations envoy in the strife-torn country said today.

But international support will be required through at least another decade for the ambitious security, political and economic transformations envisaged, Secretary-General Ban Ki-moon’s Special Representative Ján Kubiš told the Security Council.

“We must resolutely continue working together to ensure a sovereign and sustainable State that will never again become a haven for international terrorism and organized crime, notably including narco-businesses. This is in everyone's interest,” he stressed in his latest quarterly report on the UN Assistance Mission in Afghanistan (UNAMA).

“Security transition is proceeding as planned,” he said of the largely United States-manned International Security Assistance Force (ISAF) with a current strength of nearly 85,000, which is to be withdrawn by the end of next year. “There has not been the catastrophic collapse in security some doomsayers had predicted.

The Afghan army and the Afghan police are stepping up to the challenge. There are of course setbacks and casualty rates are of concern.”

But he warned: “The security challenges are real and should be proactively and realistically addressed to promote maximum inclusion and avoid any pretext for disenfranchisement or delay.”

He also underscored the need for international observation efforts not just on Election Day but in the run-up to the polls and the compilation of results to build confidence. “I urge Member States, together with regional and multilateral organizations, to contribute to efforts in this regard,” he said.

Turning to the country’s internecine fighting, he stressed that direct talks between the Afghan authorities and anti-Government forces remain essential, pledging UN assistance in the matter and highlighting the importance of regional engagement in the process.

“In my meetings with the leaderships of Afghanistan's neighbours and regional partners, I heard concerns centred around current uncertainties,” Mr. Ján Kubiš said. “This included the potential for volatility post-2014 if there is a vacuum which could encourage the spread of Al-Qaeda-linked international terrorism and criminality with implications across the region.”

He cited the drug cultivation as another matter of “grave concern,” noting that 2013 has been a record-setting year of poppy cultivation and production in Afghanistan, resulting in some 5,500 tonnes of opium, a threat to “the health, security and economic well-being not just of Afghanistan but also the region and wider international community.”

Other issues of concern include the toll of the conflict on civilians with 2,730 deaths and 5,169 injuries reported to the end of November, a 10 per cent increase over the same period of 2012, the vast majority caused by armed opposition groups.

Corruption, impunity and lack of accountability are major drivers of violence, he added, noting that Afghanistan is currently ranked 175th of 177 countries on Transparency International's Corruption Perception Index.

Mr. Ján Kubiš said humanitarian needs will likely increase, with poverty exacerbating vulnerability to natural disasters and conflict, while the dangers to those seeking to assist are also rising, with 237 incidents against humanitarian personnel, facilities and assets recorded so far in 2013, including 36 deaths, 24 detentions, 46 injuries and 72 abductions.

On the issue of violence against women, he noted that Afghan authorities registered more reports over the past year, but that prosecutions and convictions remained low. “Some areas, such as elections, have seen encouraging results but greater efforts are needed in others such as implementation of the Law on the Elimination of Violence Against Women,” he said.

“Increased levels of reporting are a positive development, but must be met by real will to enforce legal prohibitions on harmful practices against women, including the prosecution of perpetrators.”

Finally he noted the nature of UNAMA itself is likely to change with the transition under way. “By its very definition, transition is a time of managed change. There will necessarily be a reorientation of UNAMA's mandate in recognition of enhanced sovereignty and Afghan lead,” he said. “The future role of the United Nations in Afghanistan will likely be considered more comprehensively when there is greater clarity on the impact of the political and security transitions.” 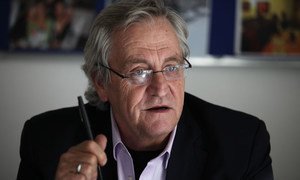 As preparations continue for next year’s presidential and provincial council elections in Afghanistan, the United Nations mission there today welcomed the appointment of the Media Commission as another important step towards holding credible polls.