Syria: UN agency voices horror at reported bomb raid that killed up to 28 children in Aleppo

The United Nations Children’s Fund (UNICEF) voiced horror today at reports that as many as 28 Syrian children were killed in a bombing raid in Aleppo while the UN World Food Programme (WFP) announced plans to expand emergency food aid to over 7 million displaced Syrians in what it called “the worst humanitarian crisis … in decades.”

“Recent assessments show that almost half the population inside Syria is food insecure and close to 6.3 million people need urgent, life-saving, food aid, victims of the nearly three-year-old conflict that has pitched forces loyal to President Bashar al–Assad against groups seeking to oust him. So far more than 100,000 people have been killed and 8 million driven from their homes.

“This is the worst humanitarian crisis that we have seen in decades, with every day more vulnerable Syrians pushed into hunger,” WFP’s Syria Emergency Coordinator Muhannad Hadi said in announcing the plans for 2014 to feed 4.25 million displaced Syrians inside their country and around 2.9 million others who fled to neighbouring States.

“One way of slowing the influx of refugees into neighbouring countries is by providing essential and urgently needed humanitarian assistance to conflict-affected Syrians inside their country.”

WFP plans to increase the size of its food basket to provide more calories per person per day as other sources of food are increasingly scarce for the most vulnerable. Given the importance and urgency of preventing and reducing malnutrition among children in the first 1,000 days of life, WFP will focus its resources on nutritional food supplements for 240,000 children aged 6-23 months.

A new school feeding programme will also start in Syria’s most critical governorates, mainly Aleppo, Al Hassakeh, and Rural Damascus where access to education has been worst affected by the crisis. WFP will provide cash and voucher assistance to pregnant women and nursing mothers so Syria’s new generation is not scarred by the legacy of hunger and micronutrient deficiencies.

The vouchers will initially benefit 15,000 vulnerable and displaced mothers in areas where food markets are functioning but food is out of the reach of people because incomes have fallen.

In neighbouring countries, WFP will expand its voucher project to provide food to more than 2.9 million people in Lebanon, Jordan, Turkey, Iraq, and Egypt. The vouchers can be redeemed against a list of items like fresh produce that are not normally included in food rations. WFP uses vouchers when food is available in the market but people do not have money to buy it. Vouchers also boost the local economy and have pumped hundreds of millions of dollars into the economies of host countries.

The raid in Aleppo, northern Syria, was reported to have occurred yesterday when improvised bombs were dropped from helicopters and between 14 and 28 children were killed.

“UNICEF is horrified by reports of a bombing raid in Aleppo that may have killed as many as 28 children,” said the agency’s Regional Director for the Middle East and North Africa Maria Calivis.

“It is absolutely unacceptable for children to be targeted in this manner, whether through the use of indiscriminate weapons resulting in mass casualties, or by any other means. UNICEF has repeatedly called upon all parties to uphold their obligations under international humanitarian law to protect all civilians, including children, from the conflict and we strongly reiterate that call again today.” 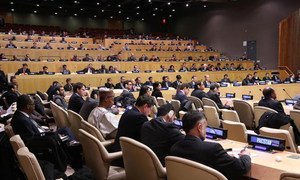 Secretary-General Ban Ki-moon today called on the international community to hold accountable those responsible for the use of chemical weapons in Syria, following the findings of a United Nations team that such weapons were used on several occasions at multiple sites against both civilians and military targets.