16 December 2013
Voicing concern over the lack of a national action plan by the Bahamas to address trafficking in persons, an independent United Nations human rights expert called on the Government to ramp up its efforts to fight the ongoing problem.

“The Government of the Bahamas has demonstrated willingness to combat trafficking in persons,” said Joy Ngozi Ezeilo, Special Rapporteur on trafficking, at the end of her three-day official visit to the country.

However, she stressed that “the country lacks a National Plan of action to effectively address trafficking in persons, setting out clear objectives and responsibilities to implement the existing legal framework while integrating a human rights and victim centered approach.”

As a major transit country for migrants attempting to enter the United States, the Bahamas is also a point of transit and destination for trafficked persons from the Caribbean and Central and South America. The scale of trafficking is difficult to quantify, given low identification and prosecution by authorities.

Of particular need, she highlighted, is a broad assessment of the trends and scopes of trafficking and the creation of a rapporteur to monitor the phenomenon at the national level, as well as an equivalent mechanism to evaluate implementation of existing policies and their impact on trafficking.

While recognizing efforts being made to include information on human trafficking into the regular training curriculum of the Royal Bahamas Defence force, Ms. Ezeilo underscored the urgent need for the Government to “scale this up and continually enhance the knowledge and skills of these front line officers to identify and protect trafficked persons.”

Moreover, she urged the Government “to address demand for cheap labour and sexual services from poor neighbouring countries and the prevailing social fabric that may contribute to increase people’s vulnerability to trafficking.”

“Cooperation is imperative to end the impunity of traffickers and to prevent human trafficking,” said Ms. Ezeilo, expressing her confidence with the Commonwealth of the Bahamas to “become a model for other countries in the Caribbean Region.”

One month on, UN renews pledge to help Philippines recover from deadly typhoon 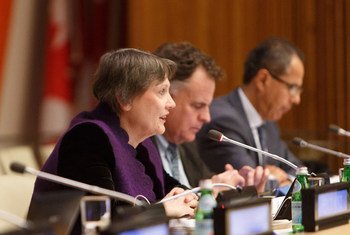 12 November 2013
Latin America remains the most unequal and most insecure region in the world, the United Nations reported today, calling for inclusive economic growth and enhanced security and justice institutions as the most efficient ways to reduce insecurity.