The Central African Republic (CAR), wracked by conflict that has killed thousands of people and driven more than half a million from their homes over the past year, is now facing a looming food crisis, the United Nations warned today, calling for urgent action to provide crop seeds to farmers.

Crop production has decreased sharply after the civil conflict that broke out in the north-east last December spread through the rest of the country and seeds are now in short supply due to looting and because people have had to eat them instead of saving them for planting.

“Desperate farmers have been selling tools and livestock so that they can feed their families, which leaves them without means of making an income, and raids on livestock and agricultural equipment have been widespread,” UN Food and Agriculture Organization (FAO) Emergency and Rehabilitation Director Dominique Burgeon said in Rome.

Due to the challenges in reaching affected farming families, work must begin now to help them get ready for the 2014 planting seasons, FAO said. Planting of the main 2014 maize crop is due to start in early March in the centre and south of the country, while planting of sorghum and millet should start in the north of the country in May. Farmers urgently need seeds and other agricultural inputs in time for planting in March.

Agriculture accounts for 53 per cent of gross domestic product (GDP) and a major share of employment in the CAR, where nearly three quarters of the population of 4.6 million people live in rural areas. Agricultural exports, one of the main sources of foreign exchange earnings, have dropped sharply this year, especially timber, cotton and coffee.

Food prices are high and volatile due to severe market disruption. Maize prices in Bangui, the capital, rose 31 per cent between January and November, while millet prices increased by 70 per cent between March and October in Ouham province, an important sorghum and millet producing area in the northwest.

CAR has been thrown into turmoil since Séléka rebels launched attacks a year ago and forced President François Bozizé to flee in March. A transitional government has since been entrusted with restoring peace and paving the way for democratic elections, but armed clashes have erupted again.

In Bangui last week, Christians and Muslims launched reprisal attacks against each other in and around the city, killing at least 450 people and driving nearly 160,000 others from their homes.

Earlier this month the Security Council authorized an African-led and French-backed peacekeeping force to quell the spiralling violence, and Secretary-General Ban Ki-moon took to the airwaves on Friday to make a personal appeal to the CAR people to end the bloodshed, which has been marked by increasing inter-communal violence between Christians and Muslims.

“The recent upscaling in peacekeeping operations in the country is expected to create favourable conditions for farmers to return to their fields,” said Bukar Tijani, FAO Regional Representative for Africa.

“This is why we need to get inputs to them urgently. Failure to assist them will bring a serious deterioration of the food security situation and a massive need for protracted food assistance.” 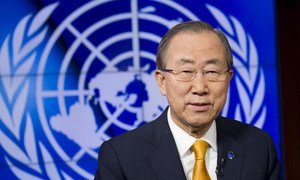 Secretary-General Ban Ki-moon is taking to the airwaves today to make a personal appeal to the citizens of the strife-torn Central African Republic (CAR) to end the bloodshed that is tearing their country apart with increasing inter-communal violence between Christians and Muslims, warning perpetrators that they will be held to account.