12 December 2013
The United Nations team probing the use of chemical weapons in Syria, which in September found “clear and convincing evidence” of Sarin gas attacks against civilians, including children, in the Damascus area, today reported “credible information” that such weapons were used against soldiers and civilians in other parts of the country.

“The United Nations Mission collected credible information that corroborates the allegations that chemical weapons were used in Khan Al Asal on 19 March 2013 against soldiers and civilians,” according to the final report, which team leader Dr. Åke Sellström handed over to Secretary-General Ban Ki-moon at UN Headquarters in New York.

“However, the release of chemical weapons at the alleged site could not be independently verified in the absence of primary information on delivery systems and of environmental and biomedical samples collected and analysed under the chain of custody.”

The report concludes that “chemical weapons have been used in the ongoing conflict between the parties” in Syria, and repeated the team’s earlier finding of “clear and convincing evidence” of chemical weapons use against civilians, including children, on a relatively large scale in the Ghouta area of Damascus on 21 August 2013.

Since the allegations arose, the Government has acknowledged that it possessed chemical weapons, joined the Chemical Weapons Convention, and pledged their elimination. A Joint UN Mission with the Organization for the Prohibition of Chemical Weapons (OPCW) was established and is overseeing the destruction of Syria’s stockpiles and production facilities.

“The use of chemical weapons is a grave violation of international law and an affront to our shared humanity,” Mr. Ban said on receiving the report. “We need to remain vigilant to ensure that these awful weapons are eliminated, not only in Syria, but everywhere.”

In all the cases the team, appointed before Syria acknowledged that it possessed such weapons, did not specify which party might have used the weapons in the nearly three-year old civil war between the Government and opposition fighters, since that was not part of its mandate.

It based its Ghouta findings on Sarin found in exploded surface-to-surface rockets at the site, environmental contamination by Sarin in the area where patients were affected, epidemiology of over 50 interviews given by survivors and health care workers, survivor intoxication by an organophosphorous compound, and blood and urine samples that were positive for Sarin.

In the case of Khan Al Asal, near Aleppo in the north of the country, the team based its findings on the epidemiology from witness statements of medical staff and military personnel participating in the rescue operation and on the documentation from the local health sector provided by Syria, Interviews with secondary exposed survivors that confirm symptoms of an organophosphorous intoxication.

In other cases the team reported evidence consistent with the probable use of chemical weapons in Jobar on 24 August, on a relatively small scale against soldiers but because of the absence of primary information on delivery systems and environmental samples collected and analysed under the chain of custody, it could not establish the link between the victims, the alleged event and the alleged site.

It could not corroborate the allegation that chemical weapons were used in Bahhariyeh on 22 August due to lack of blood samples, and in Sheik Maqsood on 13 April in the absence of further information.

“The United Nations Mission remains deeply concerned that chemical weapons were used in the ongoing conflict between the parties in the Syrian Arabic Republic, which has added yet another dimension to the continued suffering of the Syrian people,” the report concluded.

Formally known as the Mission to Investigate Allegations of the Use of Chemical Weapons in the Syrian Arab Republic the team led by Dr. Sellström, a Swedish scientist, was established by Mr. Ban on 21 March and was assisted by experts from the UN World Health Organization (WHO) and the OPCW.

The Secretary-General will brief the General Assembly on the report in a closed session tomorrow afternoon. Following that briefing, the High Representative for Disarmament Affairs, Angela Kane; Head of the UN Mission, Professor Sellström; and the team leaders, Scott Cairns from the OPCW and Dr. Maurizio Barbeschi from WHO are expected to brief the press at Headquarters.

Lebanon: as winter storm bears down, UN and partners ramp up aid for Syrian refugees 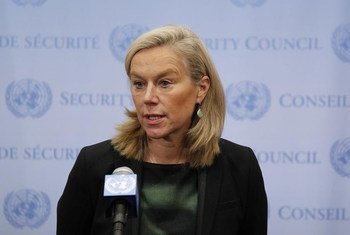 4 December 2013
Preparations are proceeding for removing Syria’s chemical agents out of the country for their destruction, the head of the joint mission of the Organisation for the Prohibition of Chemical Weapons (OPCW) and the United Nations reported today, calling for continued support from the international community to complete this important task.