More women are being diagnosed with and dying from breast cancer, the specialized cancer agency of the United Nations World Health Organization (WHO) today reported, calling for greater attention to prevention and control measures to offset lifestyle changes which pushed breast cancer to be the leading cause of cancer death among women.

Global cancer rates jumped to more than 14 million last year, with some 1.7 million women diagnosed with breast cancer last, an increase of 20 per cent since 2008, according to the International Agency for Research on Cancer (IARC), while the mortality rate rose 14 per cent over that time period with 522,000 deaths in 2012.

“A shift in lifestyles is causing an increase in incidence, and partly because clinical advances to combat the disease are not reaching women living in these regions,” David Forman, Head of the IARC Section of Cancer Information, the group that compiles the global cancer data, said explaining why the disease is also affecting women in less developed countries.

A shift towards lifestyles typical of industrialized countries “leads to a rising burden of cancers associated with reproductive, dietary, and hormonal risk factors,” according to the IARC.

Incidence rates remain highest in more developed regions, but mortality is relatively higher in developing countries due to a lack of early detection and access to treatment facilities.

That trend extends to all types of cancer, with nearly 57 per cent of instances and 65 per cent of deaths last year reported in less developing countries, a tendency expected to further increase by 2025.

“An urgent need in cancer control today is to develop effective and affordable approaches to the early detection, diagnosis, and treatment of breast cancer among women living in less developed countries,” explained Christopher Wild, IARC Director, as way of bringing the rates of instances and mortality in line with progress made in more developed parts of the world.

In addition, cervical cancer is the fourth most common type of cancer affecting women, after breast, colorectal and lung cancer, particularly in areas with lower levels of development which lack access to effective screening and where the HPV vaccine and other services are not available.

Overall, an estimated 14.1 million people developed cancer last year and 8.2 million died of cancer-related reasons, according to the IARC’s new online database, GLOBOCAN 2012. Those figures are compared with 12.7 million new instances in 2008, and 7.6 million deadly cases.

Reviewing information for 28 types of cancer in 184 countries, IARC found that the most commonly diagnosed cancers worldwide in men and women combined were lung, breast and colorectal cancers. The most common causes of cancer death were lung, liver and stomach cancers. 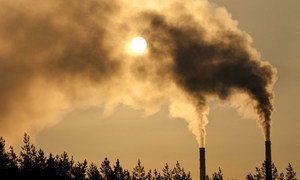 The specialized cancer agency of the United Nations World Health Organization (WHO) announced today that outdoor air pollution is a leading environmental cause of cancer deaths.