Incorporating natural resources in peacebuilding efforts can help to mitigate potential conflicts, such as disputes over land or water, and give green jobs to former soldiers, according to a joint report released today by UN Development Programme (UNDP) and the UN Environment Programme (UNEP).

“When helping former fighters and their communities to start new lives after a conflict, it is often critical to help them turn existing natural resources into economic opportunities,” said Jordan Ryan, UNDP Assistant Administrator and Director of the Bureau for Crisis Prevention and Recovery.

“However, natural resources need to be managed properly as part of a well thought-out peace process,” he stressed in reference to minerals, oils, gas and timber.

According to ‘The Role of Natural Resources in Disarmament, Demobilization and Reintegration – Addressing Risks and Seizing Opportunities’, plans for the fair management and distribution of natural resources are usually excluded from peace negotiations and disarmament, demobilization and reintegration (DDR) programmes, which have become an integral part of the UN’s post-conflict peace consolidation over the last 20 years.

For example, in Sierra Leone, natural resources, which now make up 90 per cent of the country’s exports, were implicated in the country’s civil war, according to the report authors.

Meanwhile, as an example of the creation of “green jobs” in a post-conflict setting, after the signing of the peace agreement in Nepal in 2006, approximately 19,600 former Maoist fighters awaiting integration into the Nepalese National Army were taught how to upkeep water systems and improved cooking stoves in their own cantonment camps.

The report notes that given one-third of UN peacekeeping operations since 1990 have taken place in areas where the conflicts have been economically fuelled by, or otherwise driven by, natural resources, effective natural resource management has the potential to reduce risk of inflaming conflicts.

The authors also noted the need to consider access to natural resources among vulnerable groups, such as women, who play a particularly important role as they are primarily responsible for providing food, water and other basic resources for households. 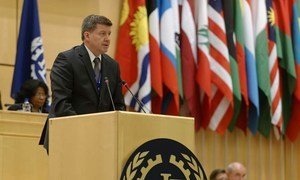 Demography and technology are helping to transform the work force more quickly and deeply than ever before and the United Nations International Labour Organization (ILO) is poised to tackle the new challenges, the agency’s chief today said opening a two-week conference.