“Gays and lesbians seem to be the last group of people that it’s still ok to pick on for whatever reason in whatever way,” Ms. Navratilova said, adding that the abuse ranges from being bullied in school to being denied basic rights, incarcerated or sentenced for acts punishable by death in certain countries.

“Sport and politics are inextricably combined. They go hand in hand,” she said urging athletes who are also members of the lesbian, gay, bisexual, and transgender (LGBT) community to be more visible. “Get in their face. Once you’re visible, you make it personal.”

The dominant tennis player of her time, and out since 1981, Ms. Navratilova spoke to journalists at UN Headquarters in New York before attending a special event for Human Rights Day, “Sport comes out against homophobia.” The event, organized by the UN human rights office (OHCHR) and other members of the LGBT Core Group at the UN, is supported by UN Women and the non-governmental organizations United for Equality in Sport and Entertainment and Global Action Initiatives.

Responding to media questions about the upcoming Olympic and Paralympic Games in Sochi, Russia, where some have criticized authorities for an aggressive stance towards sexual minorities, NBA player Jason Collins said the focus should be on the local LGBT community.

“Once the games leave, all those people are still going to be there oppressed,” he said. “That’s something that isn’t right. People should be able to live their lives openly, and not be afraid that if they say or do the wrong thing, just by holding someone’s hand in public that they can go to jail.”

The former Washington Wizards center became the first active male professional athlete in a major North American team sport to come out publicly as gay when he made his announcement in May of this year.

The event also included a video message from Secretary-General Ban Ki-moon who today is in Johannesburg, South Africa, for an official memorial service for Nelson Mandela.

“Today, we again denounce all attacks on lesbian, gay, bisexual, transgender or intersex people. We oppose all arrests, imprisonments and discrimination they suffer. And we recommit ourselves to building a world of freedom and equality for all,” Mr. Ban said.

“Sports cut across borders and continents. Games unite people across cultural divides. Professional athletes are heroes to their fans. And when they speak out against prejudice, they are heroes to the United Nations,” he added.

Also taking part in the event were Tumi Mkhuma of the Forum for the Empowerment of Women in South Africa, Hida Viloria, Chair of Intersex International (OII) USA, Anastasia Smirnova of Russia’s LGBT Network, as well as UN Assistant Secretary-General for Human Rights Ivan Šimonovic. The discussion was moderated by MSNBC anchor Thomas Roberts.

During the event, the OHCHR’s global campaign for LGBT equality, ‘Free & Equal’ featured a new infographic video tracing the evolution of the debate on LGBT rights at the UN.

The Organization held its first ministerial meeting on LGBT rights this September, on the margins of the General Assembly’s annual high-level debate. Ministers adopted a declaration committing to work together to combat discrimination and protect the rights of all human beings regardless of their sexual orientation or gender identity.

More than 76 countries still criminalize consensual adult same-sex relationships, while in many more countries discrimination against LGBT people is widespread – including in the workplace and in the education and health sectors, according to UN figures. 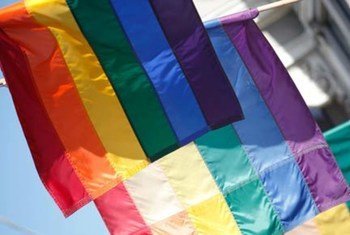 26 September 2013
Countries attending the first ministerial meeting held at the United Nations on the rights of lesbian, gay, bisexual and transgender (LGBT) individuals today reaffirmed their commitment to work together to combat discrimination and protect the rights of all human beings regardless of their sexual orientation or gender identity.