United Nations agencies are scaling up efforts to assist the scores of civilians uprooted by the surging violence in the Central African Republic (CAR), reported to number over 100,000 in the capital alone, bringing the total number of those displaced since the conflict began a year ago to over half a million.

The UN High Commissioner for Refugees (UNHCR) said an estimated 108,000 people were staying in 30 locations across Bangui after being displaced by heavy fighting between former Séléka rebels and other militia groups, such as the anti-Balaka, last Thursday.

“This brings to more than half a million the total number of people displaced within CAR since the crisis began in December 2012,” the agency’s spokesperson in Geneva, Adrian Edwards, told a news conference.

Last December the Séléka rebel coalition launched a series of attacks, culminating in March when President François Bozizé was forced to flee. A transitional government, headed by Prime Minister Nicolas Tiangaye, has been entrusted with restoring law and order and paving the way for democratic elections.

However, armed clashes have recently resumed, and the country is facing a dire humanitarian situation in which half of its population of 4.6 million are in need of immediate assistance. Nearly 400 people have been killed and hundreds more injured in armed clashes since last Thursday, according to the UN humanitarian office (OCHA).

UNHCR said the internally displaced persons (IDPs) are staying mainly in churches, mosques, public buildings and the airport. Living conditions are “appalling” in many of the sites hosting the displaced, particularly at the airport and at a local monastery, said Mr. Edwards.

“People there are sleeping in the open and it is raining. Many of the displaced spend the night in the sites, and then return home during the day. But because they fear nightly attacks by armed elements, they go back to the IDP sites before the 6 pm curfew.”

UNHCR and its partners have been distributing tents, blankets, sleeping mats and other relief items to ease the suffering of the mostly women and children in the displaced sites.

Spokesperson Marixie Mercado said that the UN Children’s Fund (UNICEF) will bring medicine and emergency supplies to several of the sites hosting the displaced across Bangui and to the two main hospitals that are treating the injured.

The number of displaced has also swollen in recent days in Bossangoa, where UNICEF continues to provide safe water and emergency supplies. UNICEF is working with partners to reach children and families with emergency assistance where security access permits, but it is known that 10,000 children and families had been hiding in the bush, totally beyond reach, for months, Ms. Mercado noted.

“UNICEF repeats its appeal to leaders of all armed groups to stop attacks on civilians, to protect hospitals and displacement camps, and to provide the space needed for humanitarian workers to reach people with critical assistance,” she added.

To respond to immediate needs, the World Food Programme (WFP) is providing food assistance to affected people across the capital, as well as in Bossangoa, the agency said in a news release.

“The humanitarian situation in the Central African Republic remains critical and will worsen as people continue to be affected by violence. WFP together with partners, needs to be in the frontline to provide support and assist the most vulnerable,” said Guy Adoua, WFP Deputy Country Director.

Despite security constraints, WFP’s response includes the providing food assistance to more than 19,000 people in Bangui during the first three days and giving cooked meals to patients at two hospitals.

In Bossangoa, activities were disrupted for four days by the most recent wave of violence, but assistance has since resumed. On Monday, WFP provided food to over 2,000 people and is continuing distributions. Already this year, WFP has reached 35,000 displaced people in the Bossangoa area with food assistance.

According to OCHA spokesperson Jens Laerke, the $195 million humanitarian appeal launched earlier this year for CAR is currently 45 per cent funded. That appeal did not take into account the latest displacement and humanitarian consequences, he pointed out. 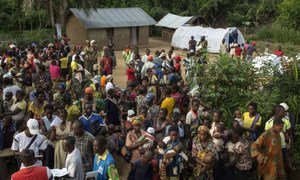 The United Nations says that aid agencies in the Central African Republic (CAR) remain preoccupied by the alarming deterioration of the humanitarian situation, particularly in the capital, Bangui, and in Bossangoa.