The United Nations Security Council today urged a return to constitutional order in Guinea-Bissau, which has postponed presidential and legislative elections until next year, and warned that it would consider further measures – such as sanctions – against anyone who hampers such efforts in the West African country.

“The Security Council urges stakeholders in Guinea-Bissau, including political and military leaders to refrain from any action that could hamper the electoral process and the implementation of reforms, which are key to the long-term stability,” the 15-member body said in a presidential statement.

Constitutional order has still not been restored in Guinea-Bissau, which is recovering from an April 2012 coup. A transitional Government led by Transitional President Serifo Nhamadjo is in place until elections are held.

The presidential and legislative elections were to have been held last month but have now been scheduled for 16 March 2014.

“The Security Council urges the Authorities in charge of the transitional period to ensure there is no further delay or postponement that could further affect the already fragile socioeconomic, security, humanitarian and human rights situation in Guinea-Bissau,” according to the statement.

The Council also expressed grave concern at the recent security deterioration in the country, “including many cases of violations and abuses of human rights and acts of violence against persons and property, intimidation, threats and restrictions of freedom of expression and assembly” reportedly carried out by State and non-State armed elements.

Such acts of insecurity create an atmosphere of fear and intimidation among people, and coupled with political tensions, “undermine an environment conducive to the holding of timely, credible, peaceful and inclusive elections.”

Members of the Council called on the Government to ensure the safe full and equal participation of society, in particular women.

Briefing the Council in late November, Jose Ramos-Horta, the Secretary-General’s Special Representative and head of the UN political mission in Guinea-Bissau (UNIOGBIS), said that lengthy consultations among national stakeholders to agree on the voter registration system and to finalize the electoral budget and timeline contributed to the delayed elections, and affected logistics, including the mobilization of required resources to hold the polls.

In today’s statement, the Council also reiterated concerns about the “prevailing culture of impunity and lack of accountability” in the country, and continued drug-trafficking in the country as well as across its borders. 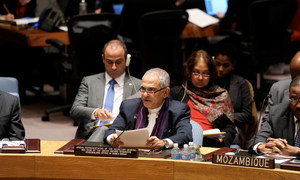 The holding of credible and peaceful elections next year is vital for the process of restoring constitutional order in Guinea-Bissau, a United Nations envoy told the Security Council today, urging continued international support to help the West African nation complete this process.