9 December 2013
Secretary-General Ban Ki-moon is in Johannesburg, where he will join scores of world leaders at the official memorial service for former South African President Nelson Mandela on Tuesday.

“We join together in sorrow for a mighty loss and in celebration of a mighty life,” Mr. Ban said in remarks at the Nelson Mandela Centre of Memory, which is a museum.

“Nelson Mandela’s principled stand in defense of the fundamental equality of all human beings was decisive in dismantling the system of apartheid,” said Mr. Ban. “His remarkable compassion upon his release from prison after 27 years set South Africa immediately on a path of dialogue and reconciliation.”

The Secretary-General hailed Mr. Mandela as “a giant for justice, equality and human rights,” adding that he was more than one of the world’s greatest leaders. “He was a teacher, and he taught and practiced by example.”

Mr. Ban recalled meeting Mr. Mandela at his home in February 2009, and how “deeply moved” the UN chief was by the way Madiba put the well-being of others first, by his humility, modesty, humble mind, and human decency.

“That is wisdom for today as we strive to help the vulnerable, end armed conflict, protect human rights and create the better world for which Nelson Mandela gave so much.

“The people of South Africa and the entire world have lost a hero. His legacy is profound, immortal and will continue to guide the work of the United Nations.”

The Secretary-General also visited Mr. Mandela’s residence, where he offered his condolences to the former President’s family.

According to media reports, Tuesday’s memorial service in Johannesburg will precede three days during which Mr. Mandela’s body will lie in state in the Union Buildings in Pretoria before his burial on Sunday in his childhood village of Qunu in the Eastern Cape. 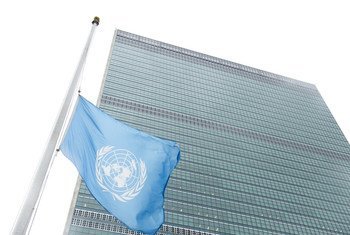 6 December 2013
The United Nations family today mourned the loss – and celebrated the enduring legacy – of Nelson Mandela, the former South African leader and peace advocate who passed away yesterday at the age of 95.