UNODC
No country, region or community is immune to corruption, a serious crime that can undermine social and economic development in all societies.
9 December 2013

Corruption is a barrier to achieving universally accepted development goals, Secretary-General Ban Ki-moon said today, calling on Governments, the private sector and civil society to take a collective stand against a social, political and economic disease affecting all countries.

“To achieve an equitable, inclusive and more prosperous future for all, we must foster a culture of integrity, transparency, accountability and good governance,” Mr. Ban said in his message for International Anti-Corruption Day.

He stressed that corruption prevents achievement of the global anti-poverty targets known as the Millennium Development Goals (MDGs) and needs to be taken into account in defining and implementing a robust post-2015 development agenda.

Corruption has a devastating impact across the world. The World Bank estimates that every year between $20 billion and $40 billion are lost from developing countries due to corruption and bribery, but the scourge also impacts developed economies.

The UN Office on Drugs and Crime (UNODC) and the UN Development Programme (UNDP) today launched the ‘Zero Corruption – 100% Development’ campaign, designed by young people for young people to raise awareness about corruption.

The campaign focuses on the corrosive effects of corruption on development, highlighting that this crime undermines democracy and the rule of law, leads to human rights violations, distorts markets, erodes quality of life and allows organized crime and other threats to security to flourish, according to the joint campaign website.

To highlight the impact of corruption in the world of sport and business, the UN Global Compact, in collaboration with UNDP, today launched a Call to Action to mobilize private and public partners to engage in transparent procurement.

The UN has also developed guidelines to help businesses fight corruption in sport sponsorship and hospitality, Mr. Ban noted in his message.

The first global legally binding international anti-corruption instrument was the UN Convention against Corruption, which today marks its tenth anniversary. It was adopted by the General Assembly in 2003, the same year that the body designated 9 December as International Anti-Corruption Day to raise awareness of both corruption and the role of the Convention in combating and preventing it.

“The Convention is countering corruption in the areas of development, the environment, in the private sector, during major public events, match-fixing, asset recovery, and in many other areas of our lives,” said Yury Fedotov, the Executive Director of UNODC, which houses the Convention’s Secretariat.

At least 171 of the UN’s 193 Member States have so far ratified the Convention. It includes a review mechanism enabling countries to review their peers in a partnership process. In its fourth year, the review mechanism has helped 35 States to improve their anti-corruption laws, and led to the training of 1,400 experts, noted Mr. Fedotov.

“This spirit of cooperation is necessary,” he said. “Corruption is not simply a developed or developing nation’s problem, it is the challenge of every person, and every nation. The review mechanism mirrors this unpalatable fact.” 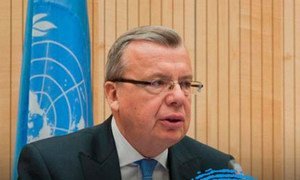 The world's largest biennial gathering of delegates in the global fight against corruption opened in Panama today with the United Nations top crime fighter warning that the scourge not only hobbles sustainable development but generates other crimes.