courtesy of the Philippines Air Force
The airport in Tacloban City, the Philippines, was badly damaged in the wake of Typhoon Haiyan on 8 November 2013.

8 December 2013
One month since Typhoon Haiyan slammed the Philippines, the top United Nations humanitarian official in the country today urged the international community to continue support so that people have access to food and clean water, as well as shelter and jobs.

“Visiting Tacloban today, I see big differences from my first visit, almost one month ago,” Resident and Humanitarian Coordinator in the Philippines Luiza Carvalho said. “The airport is operational, fuel is available, the water system is reconnected, people are receiving assistance and the town hall is functioning.

“It is encouraging to see significant progress in such a short space of time but we need to remember there is a long road ahead,” she added.

On Friday, UN humanitarian agencies and partners urged the world to continue to support the massive relief effort under way in the archipelago warning that the breadth of the damage is still unfolding and the needs for the millions of people affected by the storm are immense.

Of the $348 million requested for immediate aid, some $168 million has been received or roughly more than 48 per cent, the UN Office for the Coordination of Humanitarian Affairs (OCHA) reported.

Challenges over the coming months will involve reopening the damaged schools and public buildings and restoring services.

“The international community has rallied to support the affected communities but support will be needed well in to 2014 as the long task of rebuilding lives continues,” the local OCHA office said in a news release.

In support of the Government-led response, humanitarian partners have reached 3 million people with food assistance and more than 20,000 families received rice seeds in time for the planting season, according to OCHA figures provided today. Over the next six months more than 100,000 children up to 2-years, as well as pregnant women and new mothers, will be assisted with feeding programmes.

Medical teams are covering 25 municipalities and projects were launched to provide cash-for-work schemes to re-ignite the economy. Inputs for farmers and fishers will be procured to enable them recover livelihoods.

Meanwhile, four million galvanized iron sheets are expected to be required for families to rebuild their homes, the UN relief agency announced.

“The people of the Philippines are known the world over for their resilience. You just have to see Tacloban and how the recovery of the city, which was so badly damaged, is underway,” said Ms. Carvalho. 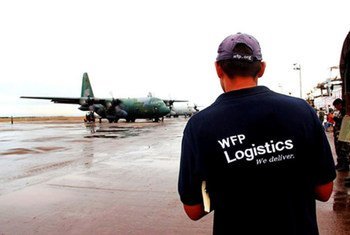 6 December 2013
One month after Typhoon Haiyan churned through the Philippines, the breadth of the damage is still unfolding and the needs for the millions of people affected by the storm are immense, United Nations humanitarian agencies warned today, urging the world to continue to support the massive relief effort under way in the archipelago.