Afghan authorities registered an increased number of reported acts of violence against women and girls in the past year, but prosecutions and convictions under a landmark law remained low with most cases settled by mediation, according to an annual United Nations report released today.

While registration of reported incidents such as forced marriage, domestic violence and rape increased by 28 per cent in 16 provinces since the previous year, the use of the law on the Elimination of Violence against Women (EVAW) as a basis for indictment increased by only two per cent, according to 'A Way to Go' co-authored by the UN Assistance Mission in Afghanistan (UNAMA) and the UN High Commissioner for Human Rights (OHCHR).

“Police, prosecutors and courts, in our view, need increased resources and technical and political support and direction from the highest levels of Government to deal adequately with the increase in reporting and registration of cases of violence against women documented in this report,” Georgette Gagnon, director of the human rights unit at UNAMA and OHCHR representative, told journalists in the Afghan capital of Kabul at the report launch.

Women are “coming forward in demanding justice”, Ms. Gagnon said flanked by the heads of two key civil society group - Hasina Safi from the Afghan Women's Network, and the Afghan Women's Skills Development Centre's Mary Akrami. “The Government needs to step up and provide that justice.”

Presenting the report findings, Ms. Gagnon said that of an estimated total of 1,669 reported incidents registered throughout the country only 109 cases or seven per cent went through a judicial process using the EVAW law.

“What we found is that, instead, the police and prosecutors were mediating more cases of violence against women,” said the UN official, speaking on behalf of Ján Kubiš, the Special Representative of the Secretary-General (SRSG) for Afghanistan.

Mediation whether through formal or informal dispute resolution bodies often fails to protect women from further violence by not applying criminal sanctions and legal protections for women, according to the report.

It compares and updates findings from UNAMA's December 2012 report on EVAW law implementation and is based on consultations with 203 judicial, police and Government officials, and monitoring of almost 500 cases of violence against women throughout Afghanistan. The report analyses statistical data on the law's application obtained from police, prosecutors and other judicial officials in 18 of Afghanistan's 34 provinces over the one-year period October 2012 to September 2013.

“The landmark law on the Elimination of Violence against Women was a huge achievement for all Afghans,” the UN High Commissioner for Human Rights, Navi Pillay, said in a news release from UNAMA. “But implementation has been slow and uneven, with police still reluctant to enforce the legal prohibition against violence and harmful practices, and prosecutors and courts slow to enforce the legal protections in the law.”

“Afghan authorities need to do much more to build on the gains made so far in protecting women and girls from violence,” Ms. Pillay urged.

Among its recommendations, the report calls on the Government to put in place a concrete plan, within six months, for the next two-year period for improving implementation of the EVAW law, including measures recommended to Afghanistan by the UN Committee on the Elimination of Discrimination Against Women (CEDAW) in August 2013.

Another recommendation is that major donors establish a joint monitoring framework with specific indicators to measure progress in EVAW law implementation.

The release of the report coincides with the global campaign of 16 Days of Activism against Gender Violence. The campaign begins annually on the International Day for the Elimination of Violence against Women, marked on 25 November, and ends on 10 December Human Rights Day.

♦ Receive daily updates directly in your inbox - Subscribe here to a topic.
♦ Download the UN News app for your iOS or Android devices.
violence 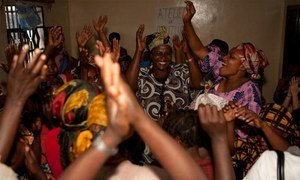