WFP/Antony Chase Lim
WFP has been coordinating with several countries to scale-up vital assistance to isolated areas, one month after super Typhoon Haiyan churned through the Philippines.
6 December 2013

One month after Typhoon Haiyan churned through the Philippines, the breadth of the damage is still unfolding and the needs for the millions of people affected by the storm are immense, United Nations humanitarian agencies warned today, urging the world to continue to support the massive relief effort under way in the archipelago.

“Just because the situation in the Philippines is no longer in the news does not mean that the needs in the country have diminished,” said Elizabeth Byrs, spokesperson for the UN World Food Programme (WFP), as she briefed the press in Geneva.

She said that emergency food assistance remained a top priority for affected communities and distributions were increasing in the islands and other areas, “but the needs are great.” A second round of emergency airlifts, carrying WFP food to the provinces of Manicani, Tubabao, Victory and Sulawani is due to take place this week. Rations for these areas will be 25 kilogrammes per family for two weeks.

“Colleagues said despite the aid, the devastation is immense and the needs of support were big,” she continued, noting that WFP had called for a total of $103 million to cover the emergency food operation for 2.5 million people for six months. So far, the agency has received less than half of that amount, with total confirmed contributions of some $45.8 million.

Expressing similar concerns, Fadéla Chaib of the UN World Health Organization (WHO) said that one month after the disaster, many challenges remain. Indeed, the agency has identified as top priorities expanding essential health services and reviving clinics and hospitals, as the majority of the infrastructure was damaged.

WHO has also prioritized preventing disease and scaling up mental health services in order to detect as quickly as possible any illnesses that might emerge as the relief effort shifts from emergency to early recovery programmes. Ms. Chaib said that overall, there are some 181 medical teams on the ground – 65 foreign and 116 local – that are delivering critical care in affected areas. She added that a mass campaign to vaccinate children under five against measles and polio is also underway.

She underscored that, within the areas affected by the typhoon, around 865 women give birth every day, among whom an estimated 15 per cent would experience complications, some of them life-threatening.

Reporting on its activities, the UN High Commissioner for Refugees (UNHCR) says that one month after the super storm swept through the Visayas region of the Philippines, tens of thousands of displaced people are returning to their home areas. UNHCR’s teams in five field locations continue to work with the Government and partners to help address the needs of the most vulnerable among them.

In a news release, UNHCR says that as the pace of return picks up and evacuation centres are being closed, it will be important to ensure the dignified relocation of displaced people who are unable to return to their homes as a result of the devastation or new building codes. This is especially true for people with specific needs including the elderly, disabled, indigenous people and households headed by women or children. Efforts are also needed to help their access to housing and livelihoods as well as documentation and legal assistance.

Even as many are returning home to rebuild, there is a movement of people, including reportedly teenagers, leaving from affected areas for big cities like Cebu and Manila to get family support and find work. UNHCR says it has also received reports of parents leaving their children with relatives in the typhoon-affected areas while they seek work in Manila.

UNHCR’s partners – including the Government’s Department of Social Welfare and Development and the International Organization for Migration (IOM) – have posted staff at departure points in Tacloban, Ormoc and Guiuan to monitor these movements and try to prevent possible trafficking. 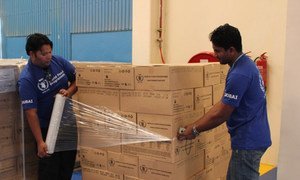 Just four weeks after super Typhoon Haiyan ripped through the Philippines, the United Nations and its partners, with the Government’s guidance, are making significant strides in helping the country recover and build back sustainably, a UN development official said today.