IRIN/Hannah McNeish
A regional peacekeeper checks an abandoned home in one of many deserted villages lining the road south of Bossangoa, Central African Republic.

5 December 2013
Seriously concerned that the new dynamic of violence and retaliation in the Central African Republic (CAR) could divide the country along religious and ethnic lines and potentially “spiral into an uncontrollable situation,” the United Nations Security Council today authorized an African-led and French-backed peacekeeping force to quell the spiralling violence.

With the deteriorating situation in the CAR “characterized by a total breakdown of law and order” and widespread human rights abuses, notably by former Séléka rebels and militia groups, the Council unanimously adopted a resolution authorizing the International Support Mission, an African Union (AU) peacekeeping force known by its French acronym MISCA, as well as the deployment of French troops to assist it.

Authorizing the expanded force for an initial 12-month period, the wide-ranging text requests Secretary General Ban Ki-moon to set up a trust fund to support MISCA and for support, in coordination with the European Union, the holding of a donors conference that would be organized by the AU.

Mr. Ban was further called on to “undertake expeditiously” contingency preparations and planning for the possible transformation of MISCA into a UN peacekeeping operation, and stressed that a future decision of the Council would be required to establish such a mission.

The resolution also imposes a sanctions regime, including a year-long embargo banning the sale or transfer to CAR of weapons of all types, including “ammunition, military vehicles and paramilitary equipment.” The Council further expresses its “strong intent to swiftly consider imposing targeted measures, including travel bans and assets freezes, against individuals who act to undermine the peace, stability and security.”

Through a related provision, the text establishes a Security Council Committee to monitor implementation of those measures and to review information regarding individuals who may be engaging in any of the proscribed actions. The new Committee would report to the wider Council within 60 days on its work.

By other terms, the resolution requests that the UN chief to rapidly establish an international commission of inquiry for an initial one-year period, including experts in both international humanitarian law and human rights law, in order to immediately investigate reports of violations of such laws and human rights abuses in CAR by all parties since 1 January 2013.

The 12-page resolution cites a range of grave concerns regarding the humanitarian situation and activities of armed groups, including the continued activity in the CAR of the Lord’s Resistance Army (LRA). The Council condemns all human rights abuses and violence targeting members of ethnic and religious groups and their leaders.

It encourages all parties and stakeholders in the CAR to support and contribute effectively, to inter-communal and interfaith dialogues, aiming at alleviating the current tensions on the ground.

Action by the Council comes as the violence in CAR has ratcheted up in recent weeks and days. The fighting raged on today and was the focus of a joint statement read out at a press conference in Bangui by Babacar Gaye, the Secretary-General’s Special Representative also on behalf of the country representatives of the UN, AU, European Union and France.

According to the Joint press communiqué, the envoys deplored the current situation, calling it “unacceptable”. Since this morning, Bangui has witnessed an organized attack by non-identified armed elements. This attack led to loss of human life and targeted assassinations.

The envoys strongly condemned the attack “and actions that threatened the life of the population and jeopardize the transitional process.” They urged Central African authorities to take their responsibilities for an immediate stop of combats and restoration of calm. They also called on the population to exercise restraint and not to engage in a cycle of retaliation.

Just yesterday, the UN Integrated Peacebuilding Office (BINUCA) voiced its deep concern at the latest deadly incidents, in Boali, which is 95 kilometres from the capital city of Bangui, which left at least 12 people dead and 30 wounded, including children.

The country witnessed a resumption of violence last December when the Séléka rebel coalition launched a series of attacks, culminating in March when President François Bozizé was forced to flee.

Briefing the Council last Monday, Deputy Secretary-General Jan Eliasson deplored mounting human rights abuses, sexual violence and other “horrors,” and urged the international community to take immediate action to halt the rapidly deteriorating situation, which, he said was “descending into complete chaos before our eyes.”

Mr. Ban later welcomed the Council’s action authorizing “vitally needed” deployments of African and French forces, among other measures, to address the grave situation in the CAR, calling it “an important and timely step that sends a message of international resolve to respond to the crisis.”

In a statement issued by his spokesperson in New York, Mr. Ban said it is urgent the resolution is implemented with all speed so that the people of the country can be spared further suffering, insecurity and violence. He affirmed his and the United Nations’ readiness to take all necessary measures to ensure its full implementation.

“The Secretary-General remains alarmed by the continued deterioration in security, as illustrated again today by a deadly attack on Bangui, including targeted assassinations carried out by non-identified armed groups,” the statement said, adding that the Organization condemns these attacks, calls on the authorities to ensure an immediate cessation of violence, and appeals to the population to exercise restraint and to avoid a cycle of retaliation. 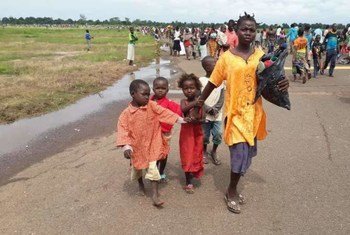 3 December 2013
The United Nations mission in the Central African Republic (CAR) today voiced its deep concern at the latest violence by armed groups in the country, which left at least 12 people dead and 30 wounded, including children.