Senior United Nations officials hailed the opening in the Republic of Korea today of the UN-backed Green Climate Fund as a significant step in the collective effort to support mitigation, adaptation and resilience measures in developing countries.

“Today’s opening of the secretariat – combined with the advances by the Conference of Parties in Warsaw and progress on the Fund’s Business Model Framework – are milestones in moving to full capitalization,” said UN Secretary-General Ban Ki-moon in a video message to the opening ceremony of the Fund headquarters in Songdo.

“The imperative now is to bring the Fund into operation as soon as possible,” he said, explaining that while it will not be the only conduit for climate finance, it will be an important element of a public-private framework that supports low-carbon investment and fair access to climate financing.

“It can strengthen national ownership and enable countries to develop the necessary expertise and institutions for using climate finance effectively,” said the UN chief, expressing hope that the mechanism will soon be able to deliver capital to reduce emissions, light rural clinics and schools, empower local farmers and support Governments and businesses to adopt low-emissions and climate-resilient options.

Christiana Figueres, Executive Secretary of the UN Framework Convention on Climate Change (UNFCCC), who attended the ceremony, called the opening “historic” and declared: “Governments now have a crucial tool at their disposal to leverage billions in finance for developing counties to green their economies and increase their resilience to the inevitable effects of climate change.”

Urging Governments to capitalize the Fund once the final modalities are worked out next year, she said such funding is essential so that developing countries know that the developed world will deliver on its promise to help the poor and vulnerable gain access to the finance and technology they need.

“Only by creating the right conditions and providing adequate financial tools can Governments vastly accelerate the shift of capital towards a greener and more resilient global economy and meet the agreed goal of limiting average global temperature rise to less than 2 degrees Celsius,” said Ms. Figueres.

The Fund, agreed at the 2010 Conference of States Parties to the UNFCCC (held in Cancun), was designated as an operating entity of the financial mechanism of the Convention. It will aim to make a significant and ambitious contribution to the efforts towards attaining agreed international goals on combating climate change, including promoting a paradigm shift towards low-emission and climate-resilient development pathways by providing support to developing countries. 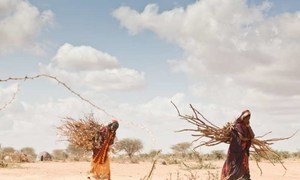 The United Nations-led climate talks in Warsaw, Poland, concluded today with an agreement that Secretary-General Ban Ki-moon called an important stepping stone towards a universal legal agreement in 2015.