4 December 2013
A senior United Nations relief official said today that while there has been improvement in the situation in strife-torn South Sudan, the UN will adjust its humanitarian strategy in the coming year to ensure that the world’s youngest nation is better able to fortify itself against the impacts of crises, both man-made and natural.

Just back from a visit aimed at keeping the global spotlight on the complex humanitarian crisis in South Sudan, Kyung-Wha Kang, Assistant Secretary-General for Humanitarian Affairs, said she had sought ways to strengthen partnership and cooperation with regional actors and Governments to help tackle the country’s myriad challenges.

“Although the humanitarian situation in the country has improved slightly over the last year, and United Nations agencies and aid partners continue to work with the Government to meet the needs of communities affected by crises, it was very clear that much more needs to be done,” she said briefing reporters at Headquarters.

Travelling through the region, she met families impacted by the sporadic violence that has afflicted those communities, as well as those affected by recent seasonal floods. “As the world’s youngest country, South Sudan is struggling to provide security and meet the basic needs of its people,” she said, noting that 4.5 million need humanitarian assistance and 1.5 million are severely food insecure.

Further, Ms. Kang said 345,000 people had been affected by the floods, as countless homes and farms were destroyed. Throughout Jonglei, “I heard harrowing stories of suffering and loss due to displacement,” she said.

In her meetings with officials in Jonglei and in the capital, Juba, she had focused on the need to find sustainable solutions to the protracted crises facing South Sudan, including finding ways to improve disaster management, scale up investment in basic infrastructure and promote broader sustainable development

With all this in mind, she said the UN Office for the Coordination of Humanitarian Affairs (OCHA) will seek a different approach to its response in South Sudan next year. The Office has recently launched a multi-year plan, to start in 2014, that will focus on immediate emergency needs as well as longer-term measures, including community resilience and national capacity-building.

“We want to work with local communities, authorities and the Government to help South Sudan cope better with crises. We want communities affected by disasters to recover and build back stronger,” she said.

Responding to questions, Ms. Kang said that during her trip, she had been struck by the number of orphans she saw. “Countless children are on the streets – not in school – and there is very little capacity to take care of them,” she said, noting that many had been orphaned due to revenge killings or as a result of cattle rustling. Some non-governmental organizations were working hard to address the issue, “but more needs to be done.”

Asked about the cycle of inter-communal fighting that has plagued Jonglei, she said that the dry season always brings the possibility of renewed violence and clashes. As such, there must be active political leadership to bring about reconciliation between ethnic groups. On that front, she said that there are hopeful peace initiatives – for example, a peace offer from the Government to the David Yau Yau armed group ¬– but that there is also a heightened possibility of renewed conflict.

She said that her Office talked with all parties, including armed groups, in an attempt to ensure humanitarian access to those in need. She decried the lack of access to South Kordofan and Blue Nile states, “which is very unfortunate,” due to the huge needs in both areas and the stalled vaccination campaign.

After South Sudan, she visited Addis Ababa, Ethiopia, for two days, where she participated in the annual Regional Coordination Mechanism meeting, which brings together UN and African Union actors to discuss better ways of coordinating efforts in support of capacity-building for AU institutions.

The last leg of her mission took her to Nairobi, Kenya, where she co-chaired the Great Lakes Consultation with Modibo Touré, advisor to the Secretary-General’s Special Envoy for the Great Lakes Region, Mary Robinson. 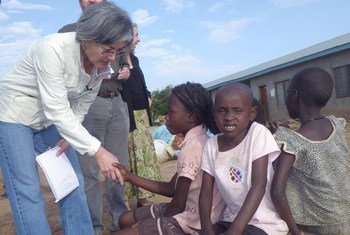 20 November 2013
International humanitarian assistance is crucial to help the world’s youngest nation tackle a range of challenges, including food insecurity, inter-communal violence and flooding, a top United Nations relief official said today as she wrapped up her visit to South Sudan.