As preparations continue for next year’s presidential and provincial council elections in Afghanistan, the United Nations mission there today welcomed the appointment of the Media Commission as another important step towards holding credible polls.

The Media Commission is charged with monitoring the reporting on and fair broadcasting of the electoral campaigns and, within the regulatory framework applying to media coverage during the electoral process, addressing any violations and offences committed by the media.

The five members of the Commission were nominated by the Board of the country’s Independent Election Commission (IEC) following a professionally-conducted selection process, the UN Assistance Mission in Afghanistan (UNAMA) noted in a news release.

“UNAMA emphasizes the important role the media can play in helping ensure transparency in the upcoming polls, and by promoting public awareness of the electoral process,” it stated. “It also highlights the importance of media outlets having a fair and balanced approach in their reporting on the elections.”

The polls, scheduled to be held on 5 April, are seen as a vital step in the ongoing transition in Afghanistan, which next year will also see the withdrawal of the majority of allied international military forces, with national forces assuming full responsibility for security throughout the country.

UNAMA, as mandated by the UN Security Council, is tasked with supporting the elections at the request of Afghan authorities and institutions.

In an effort to help meet the transportation needs associated with the elections, UNAMA today donated 12 vehicles to the IEC and the Independent Electoral Complaints Commission (IECC).

“At their request, UNAMA is charged with supporting Afghan electoral authorities however it can – from technical advice to drawing on best practices from the UN’s experiences in other countries,” said the Secretary-General’s Deputy Special Representative and acting head of UNAMA, Nicholas Haysom, at a hand-over ceremony held in the capital, Kabul.

“In this instance, UNAMA has been asked for help with meeting pressing transportation needs and the Mission is happy to be in a position to do it in support of these organizations, which have a critical role to play in making the elections happen on time and in a credible manner,” he said.

“Without the financial and technical support of international community, we would not be able to conduct this crucial and historical election,” the Director of the IEC Secretariat, Ziaul Haq Amarkhil, said at the ceremony. 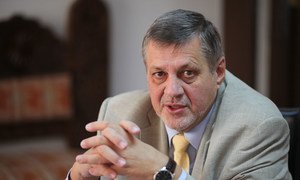 The United Nations Assistance Mission in Afghanistan (UNAMA) welcomed the announcement today of the final list of candidates for next year’s presidential and provincial council elections.