Global pop superstar Katy Perry was appointed today by the United Nations Children’s Fund (UNICEF) as its newest Goodwill Ambassador, with a special focus on engaging young people in efforts to improve the lives of the world’s most vulnerable children and adolescents.

“Katy Perry is already a champion for children, and we look forward to hearing her ‘roar’ on behalf of UNICEF,” Executive Director Anthony Lake said in a news release, referring to her recent hit song.

As a Goodwill Ambassador, Ms. Perry will work to engage young people in speaking out about the issues they believe are most important in their own lives and enlisting them more directly in coming up with solutions to those challenges.

The 29-year-old singer will focus her outreach especially on children and adolescents who are most vulnerable, including those living in severe poverty, affected by violence, abuse, and neglect, and in emergency and conflict situations.

“I believe young people have the power to change their own lives, with our help,” she said. “I am honoured to join UNICEF as a Goodwill Ambassador, and committed to doing everything I can to help children and adolescents who come from such different backgrounds but want the same thing: a brighter future.”

Earlier this year, Ms. Perry visited Madagascar as part of a UNICEF mission to draw attention to the situation of children in one of the poorest countries in the world.

In October, she joined in UNICEF’s celebration of the International Day of the Girl Child, lending her hit song “Roar” to the soundtrack of a new public service announcement to inspire girls and help them become tomorrow’s champions.

Most recently, she has called on her massive social media following to support UNICEF’s emergency relief efforts for children, including those affected by Typhoon Haiyan, which struck the Philippines in early November. 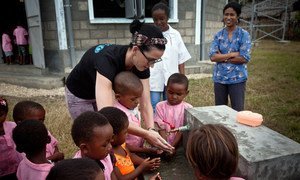 United States singer and songwriter Katy Perry has teamed up with the United Nations Children’s Fund (UNICEF) to bring attention to the situation of children in Madagascar, one of the poorest countries in the world.