UNHCR/D. Mbaiorem
Thousands of people have been forced from their homes by fresh fighting in Bangui, the capital of the Central African Republic (CAR).
3 December 2013

The United Nations mission in the Central African Republic (CAR) today voiced its deep concern at the latest violence by armed groups in the country, which left at least 12 people dead and 30 wounded, including children.

The incidents, in Boali, which is 95 kilometres from the capital city of Bangui, are the latest violence to befall CAR, where the security and humanitarian situations have been deteriorating rapidly in recent months.

The country witnessed a resumption of violence last December when the Séléka rebel coalition launched a series of attacks, culminating in March when President François Bozizé was forced to flee.

In a statement issued in Bangui, the UN Integrated Peacebuilding Office in CAR, (BINUCA) voiced its concern over the “increasingly violence environment and the related risks it entails.”

The mission urged the transitional authorities to uphold their duty to protect the population. It also called on the authorities to bring to justice those responsible for all acts of violence, and encouraged religious and political leaders to play a constructive role in enhancing social cohesion in the country.

BINUCA also reiterated the Security Council’s demand that Séléka elements and all other armed groups lay down their arms immediately and participate in disarmament, demobilization and reintegration programmes.

“We face a profoundly important test of international solidarity and of our responsibility to protect. We cannot look away,” Jan Eliasson told the Security Council, as he proposed that a UN peacekeeping mission eventually replace the current African-led International Support Mission in the CAR (MISCA).

“The CAR is becoming a breeding ground for extremists and armed groups in a region that is already suffering from conflict and instability,” he warned. “If this situation is left to fester, it may degenerate into a religious and ethnic conflict with longstanding consequences, a relentless civil war that could easily spill-over into neighbouring countries.” 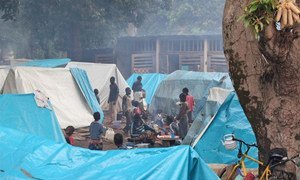 Citing mounting human rights abuses, sexual violence and other “horrors,” a top United Nations official today called on the international community for immediate action to halt the rapidly deteriorating situation in conflict-wracked Central African Republic (CAR), which, he said is “descending into complete chaos before our eyes.”