UNRWA
UNRWA is trying to help the over 400,000 Palestine refugees from Syria in need of humanitarian assistance.

3 December 2013
The United Nations agency assisting Palestinian refugees today appealed for $687 million so that it can provide basic services to this vulnerable population next year, stressing that its ability to carry out its work remains dependent on the generosity of donors.

Speaking at the annual pledging conference for the UN Relief and Works Agency for Palestine Refugees in the Near East (UNRWA), Deputy Commissioner-General Margot Ellis noted that the renewed peace talks on the Arab-Israeli conflict offer a “glimmer of hope” for the aspirations of Palestinians that their tragic plight will one day come to an end.

“Until then, UNRWA’s ability to serve Palestine refugees will remain dependent on the generosity of Member States, donors and host communities, who – together with UNRWA – bear the collective responsibility of supporting Palestine refugees,” she stated.

The Agency was created by the UN General Assembly in the wake of the 1948 Arab-Israeli conflict to carry out direct relief and works programmes for Palestine refugees. Today, it provides some five million Palestinian refugees in the West Bank, Gaza, Jordan, Lebanon and Syria with vital services such as education and health care.

“Neither the environment in which we operate nor the needs of the increasing Palestine refugee population are static,” Ms. Ellis told the gathering at UN Headquarters in New York.

For 2014, UNRWA has developed a core budget of $687 million. “Unfortunately, we already anticipate a cash shortfall of 10 per cent or $65 million,” said Ms. Ellis. “I cannot stress enough that ‘core’ means the basic services that you, members of the General Assembly, have asked us to provide, including education, health, relief and social services to Palestine refugees.”

The overall funding situation of UNRWA – which is funded almost entirely by voluntary contributions from Member States – remains “dire if not desperate,” said Ms. Ellis, noting that despite the implementation of stringent austerity measures, the Agency still has an estimated cash shortfall of $36 million this year.

Major donors to UNRWA include the United States, the European Union, the United Kingdom, Sweden, Saudi Arabia, Norway, the Netherlands, Germany, Denmark and Australia. Ms. Ellis said that the Agency’s resource mobilization efforts have expanded to new regions and countries with a view to broadening the donor base and enhancing support for UNRWA.

“The Commissioner-General has engaged with governments in Latin America, Asia and other parts of the world and we hope that the Agency will soon bear the fruits of its outreach efforts,” she stated. “Building new partnerships with the private and public sectors is also at the centre of UNRWA’s resource mobilization strategy but these take time to develop and even more time before it bears fruit.” 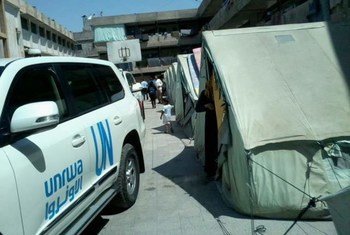