“We must remove all barriers that affect the inclusion and participation of persons with disabilities in society, including through changing attitudes that fuel stigma and institutionalize discrimination,” Secretary-General Ban Ki-moon said in his message for the Day, observed annually on 3 December. “We need to work harder to ensure that infrastructure and services support inclusive, equitable and sustainable development for all.”

About 15 per cent of the world’s population lives with some form of disability, and those persons face physical, social, economic and attitudinal barriers that prevent them from effectively participating in society.

Persons with disabilities are also disproportionately represented among the world’s poorest, and lack equal access to basic resources such as education, employment, healthcare and legal support systems.

At the first High-level Meeting on Disability and Development, held in September, countries adopted a landmark outcome document seeking to promote development initiatives that take into account the needs of persons with disabilities.

The theme for this year’s Day – ‘Break Barriers, Open Doors: for an inclusive society and development for all’ – seeks to build on that commitment, and is particularly important as countries prepare to shape the next development agenda that will follow the Millennium Development Goals after their 2015 target date.

“We must take aim at breaking down barriers and creating opportunities so that all human beings can live their lives to the fullest,” John Ashe, the President of the General Assembly, said in his message for the Day.

Hailing the commitments made at the High-level Meeting, Mr. Ashe said what the world needs now are tools for action and change to realize an inclusive society where everyone’s rights are protected and equal opportunities are supported.

To mark the Day, representatives of the UN, Governments and civil society will offer ‘Messages of Inclusion’ at a ceremony held at UN Headquarters in New York. In addition to two panel discussions, the Day will also feature the play “Breaking through Barriers,” performed by the Broadway Theatre.

Other events at UN Headquarters include the screening of the documentary “Gold: You can do more than you think,” which features the journey of three athletes from Australia, Germany and Kenya, who participated in the 2012 London Paralympic Games, and an exhibit of indigo-dyed works produced by persons with disabilities.

On Wednesday, 4 December, the UN will launch an Accessibility Centre at its New York Headquarters, as part of ongoing efforts to enable the full participation of persons with disabilities in the work of the Organization.

The new centre, which was made possible by contributions from the Republic of Korea, will provide cutting-edge tools for the visually and hearing impaired to access documents and participate in meetings, as well as charging stations for electronic wheelchairs.

The Secretary-General said the Accessibility Centre will enable persons with disabilities to participate in the inter-governmental processes, and reinforce the UN Convention on the Rights of Persons with Disabilities, which entered into force in 2008.

As of October this year, 158 countries have ratified the Convention, which asserts the rights of people with disabilities to education, health, work, adequate living conditions, freedom of movement, freedom from exploitation and equal recognition before the law for persons with disabilities. 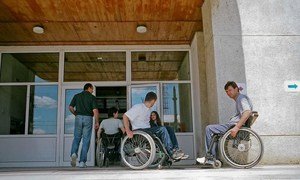 The rights of persons with disabilities must be directly addressed by the post-2015 development agenda, United Nations officials today urged a High-level meeting of the General Assembly, where world leaders pledged to work together on national and international policies that enhance and promote disability-inclusive development.