United Nations Secretary-General Ban Ki-moon has called on all sides in Yemen to participate in good faith in the country's ongoing National Dialogue and to “refrain from any obstruction of the transition process.”

In a statement issued yesterday evening by a UN spokesperson in New York, Mr. Ban also urged parties in Yemen to continue working closely with his Special Adviser on the country, Jamal Benomar.

“The Secretary-General strongly encourages all concerned to resolve their differences through genuine dialogue to enable the people of Yemen to advance the transition process,” the statement adds.

He goes on to welcome the statement issued this past Wednesday by the UN Security Council that pledged support to the peaceful transition in Yemen, including the National Dialogue Conference.

“The Secretary-General calls on all sides to participate in the National Dialogue in good faith and to refrain from any obstruction of the transition process,” the spokesman's statement said.

Yemen has been undergoing a democratic transition, with a Government of National Unity, which came to power in an election in February 2012 following protests that led to the resignation of former President Ali Abdullah Saleh. 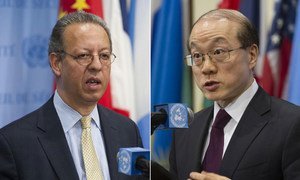 Welcoming progress thus far in Yemen’s ongoing political transition, the Security Council today pledged to support the Government’s efforts to rebuild the economy and promote national dialogue while warning all those intent on derailing the exercise that it is ready to consider “further measures in response to any actions by individuals or parties that are aimed at disrupting the transition process.”