The United Nations entity tasked with advancing gender equality today applauded the appointment of two women to the team negotiating between Colombian authorities and the rebel group known as the FARC.

“We applaud this deliberate effort by President [Juan Manuel] Santos to bring greater gender balance to his negotiating team to bring peace to Colombia,” UN Women said in a news release.

The appointment of María Paulina Riveros and Nigeria Rentería is a “welcome step that stands in contrast with the absence of women in the vast majority of peace talks and responds to years of tireless advocacy and mobilization by Colombian women’s organizations,” the UN entity said.

Earlier this month, the Government and the FARC, or Revolutionary Armed Forces of Colombia, released a joint statement announcing an agreement covering the latter’s participation in national politics if talks in Havana, Cuba, reach a final deal to end their decades-old armed conflict. The agreement also calls for the FARC to disarm and form a political movement.

Political participation is the second item of the General Agreement for the End of the Conflict and Building a Stable and Lasting Peace.

Some 600,000 people have died since the conflict between the country’s authorities and the FARC began in the 1960s. Recently, the two sides have been engaged in negotiations in the Cuban capital on various issues in an effort to put an end to the long-running conflict.

In today’s statement, UN Women said that the conflict has taken a great toll on the lives of Colombian women and children. It praised women for their commitment to shape the negotiations with “their vision for stable, inclusive and lasting peace.” 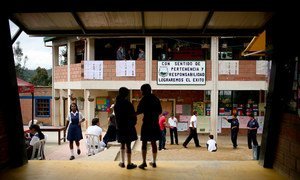