A United Nations independent expert today urged authorities in Argentina to undertake an audit of its external debt to improve transparency, and to intensify efforts to improve social conditions for their people.

Following his first visit to the country, the UN independent expert on foreign debt and human rights, Cephas Lumina, said that the audit should be in line with the UN Guiding Principles on Foreign Debt and Human Rights, which call for every State to conduct transparent and participatory periodic audits of their debt or lending portfolios.

“Such an audit will help promote accountability in public debt management and can usefully inform future borrowing decisions by the State as well as its debt strategy, expenditure on development plans and the realization of human rights,” Mr. Lumina said.

The exclusion from the international financial markets has forced Argentina to rely on its foreign reserves to service debt, and these have fallen sharply from about $50 billion to less than $33 billion since 2005.

“If this trend continues, the Government might face difficulties in honouring its debts,” the independent expert warned, previewing findings he will report in full to the UN Human Rights Council in March 2014.

He also urged the Government to intensify its efforts to improve social conditions and to promote human rights by ensuring, among other things, that its public policies on foreign debt are in line with the UN Guiding Principles as well as the State’s obligations as laid out in the Constitution and the international human rights treaties ratified by Argentina.

The expert noted that the 1994 constitutional amendments explicitly gave constitutional status to several international human rights treaties, including the International Covenant on Economic, Social and Cultural Rights, which requires Argentina to use ‘the maximum of its available resources’ to ensure the full realization of the rights to food, health, education, social security and work.

“Argentina is obliged to ensure that these rights are adequately satisfied before using public resources to achieve other State objectives unrelated to human rights, such as debt service,” the expert said. “At the very least, the State must ensure the satisfaction of minimum essential levels of each economic, social and cultural right.”

During his visit, Mr. Lumina met with senior Government officials, as well as representatives of the country’s Central Bank, Supreme and Federal Courts, international financial institutions, civil society and academia.

Independent experts such as Mr. Lumina are appointed by the Geneva-based UN Human Rights Council to examine and report back on a country situation or a specific human rights theme. The positions are honorary and the experts are not UN staff, nor are they paid for their work. 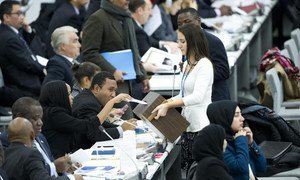