29 November 2013
The United Nations High Commissioner for Refugees (UNHCR) has voiced concern at the recent deaths at sea after a boat capsized earlier this week in the Bahamas, the third such incident in the northern Caribbean since October.

Up to 30 people – believed to be Haitian nationals – lost their lives in this week’s incident, while at least 110 other individuals were rescued by the Bahamas military and police alongside the United States Coast Guard.

Persons losing their lives at sea in the northern Caribbean this year have included men, women and children from Haiti, Dominican Republic, Cuba and Jamaica, the UN High Commissioner for Refugees (UNHCR) said in a news release.

“While we mourn these senseless deaths, we also recognize the courage and commitment of the authorities for rescuing the survivors and bringing them to safety,” said Shelly Pitterman, UNHCR’s Regional Representative in Washington, DC.

“In this hemisphere and globally, we have seen increasing numbers of desperate people fleeing dire levels of economic deprivation or escaping political turmoil and violence by taking to the high seas in search of safety or a better future,” Ms. Pitterman said.

UNHCR noted that in the past two months, hundreds of migrants and refugees, including Syrians and Palestinians, have been rescued in the Mediterranean Sea with many missing and feared drowned off the Italian island of Lampedusa.

Earlier this month, UNHCR voiced concern over reports that people were setting out to sea in smugglers’ boats from the Bay of Bengal in search of a better life free from persecution. 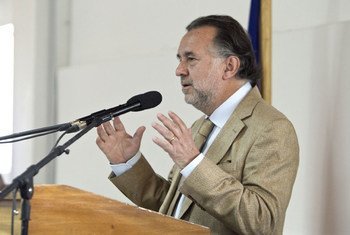 27 December 2011
The head of the United Nations peacekeeping force in Haiti today sent his condolences to the country’s President and families of the 38 people who died at sea after their boat sank off Cuba’s eastern coast last week.