Strongly condemning the shelling of the Russian Embassy in Damascus today, the Security Council deplored the incident - which left one person dead and 9 others injured - as a “heinous terrorist act,” and reaffirmed the need to combat all manifestations of terrorism “by all means”, in accordance with the United Nations Charter and international law.

“The members of the Security Council are outraged and strongly condemned the mortar shelling on 28 November against the Embassy of the Russian Federation in Damascus, Syria, which killed one and wounded 9 people including among the Embassy security personnel,” the 15-nation body said in statement issued this evening from UN Headquarters in New York.

The Council members extended their condolences to the family of the victim and expressed their sympathy to all those injured “in this heinous terrorist act.” They also underlined the need to bring the perpetrators to justice.

Further to the statement, the Council reaffirmed that terrorism in all its forms and manifestations constitutes one of the most serious threats to international peace and security, and that any acts of terrorism are criminal and unjustifiable, regardless of their motivation, wherever, whenever and by whomsoever committed.

Council members also reaffirmed the need to combat by all means, in accordance with the UN Charter “and all obligations under international law, in particular international human rights, refugee and humanitarian law, threats to international peace and security caused by terrorist acts.”

Finally, the Council recalled the fundamental principle of the inviolability of diplomatic and consular premises, and the obligations on host Governments, including under the 1961 Vienna Convention on Diplomatic Relations and the 1963 Vienna Convention on Consular Relations, to take all appropriate steps to protect diplomatic and consular premises against any intrusion or damage, and to prevent any disturbance of the peace of these missions or impairment of their dignity, and to prevent any attack on diplomatic premises, agents and consular officers. 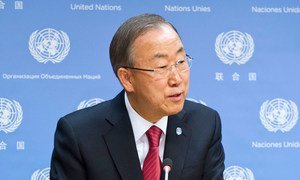 Secretary-General Ban Ki-moon today said that he would convene in Geneva on 22 January the long-sought international conference on Syria bringing together the Government and the opposition to a negotiating table for the first time since the conflict started in March 2011.