The United Nations and the World Bank today announced a concerted effort by governments, international agencies, civil society and the private sector to scale up efforts to provide sustainable energy to all, with Secretary-General Ban Ki-moon calling for massive new investments in the face of a rising “global thermostat.”

The United Nations and the World Bank today announced a concerted effort by governments, international agencies, civil society and the private sector to scale up efforts to provide sustainable energy to all, with Secretary-General Ban Ki-moon calling for massive new investments in the face of a rising “global thermostat.”

“Sustainable energy is the golden thread that connects economic growth, social equity, a stable climate and a healthy environment,” he told reporters after co-chairing with World Bank Group President Jim Yong Kim a meeting of the Advisory Board of his Sustainable Energy For All initiative, in which he called for action in four areas: finance, energy access, energy efficiency and renewable energy.

Mr. Kim stressed that financing is key, with $600 billion to $800 billion a year needed from now until 2030 to reach the goals for access to energy, energy efficiency, and renewable energy.

“We are now starting in countries in which demand for action is most urgent,” he said. “In some of these countries, only one in 10 people has access to electricity. It is time for that to change.”

Mr. Ban praised achievements already attained such as Brazil’s ‘Light for All’ programme that has reached 15 million people, Norway’s commitment of 2 billion kroner ($330 million) in 2014 for global renewable energy and efficiency, and Bank of America’s Green Bond that has raised $500 million for three years as part of its 10-year $50 billion environmental business commitment.

“Now we need others to follow and build on these commitments. Achieving the goals of Sustainable Energy For All needs massive new and additional investment,” he said, stressing the initiative’s crucial roles in achieving overall sustainable development, reducing poverty and raising opportunity, combating climate change and “laying the foundations for the future we want.”

“The global thermostat is rising, threatening development goals and economies small and large,” he added. “It is clear that we need a transformation in how we produce, use and share energy.”

Today’s meeting was the Advisory Board’s second, bringing together 42 representatives of business, finance, governments and civil society in a global public-private partnership.

It is co-chaired by Kandeh Yumkella, the Secretary-General’s Special Representative and Chief Executive for Sustainable Energy for All, and Charles Holliday, Chairman of Bank of America. Other members include Peter Löscher, chief executive of Siemens, Ibrahim Mayaki, the chief executive of the New Partnership for Africa’s Development (NEPAD), and Petter Nore from the Norwegian Agency for Development Cooperation.

Mr. Yumkella pointed to widespread support not only for Sustainable Energy for All from numerous partners but also for energy to be at the heart of the global development agenda beyond 2015, the deadline for the anti-poverty targets known as the Millennium Development Goals (MDGs).

“Eighty-one countries are now participating in this initiative,” he said. “Their action is complemented by that of private sector companies and associations, as well as civil society groups. We will continue to work with key stakeholders to achieve sustainable energy for all, to drive action that transforms lives.” 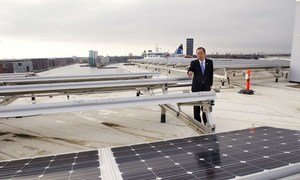