In an effort to bring all groups in Sudan’s conflict-wracked Darfur region into the peace process, the joint African Union-United Nations mediator has held talks with Chadian President Idriss Déby, seeking his support.

Mr. Chambas reiterated the need for durable peace to end the seemingly intractable conflict that has already raged on for more than 10 years, and discussed his plans to engage the non-signatory movements in a technical workshop in Addis Ababa, Ethiopia, in December.

The Sudanese Government and two major rebel groups have so far committed to the Doha Document for Peace in Darfur (DDPD), named after the Qatari capital where talks were held to end the conflicts between the Government and various armed groups which have led to the deaths of tens if not hundreds of thousands and displaced nearly two million since they first erupted in early 2003.

The Liberation and Justice Movement (LJM) signed on last year and the Justice and Equality Movement (JEM) signed a framework agreement in January, but several other groups have yet to come fully on board, including JEM-Bashar, JEM-Gibril and the Sudan Liberation Movement-Minni Minawi.

During his talks with Mr. Chambas, President Déby acknowledged that peace in Darfur is essential for regional security, noting that the conflict has had grave socio-economic consequences for Chad.

He deplored the worsening security situation in Darfur, which has stopped Sudanese refugees in Chad from returning to their country, stressed that the international community needs to be more involved in the peace process to steer the non-signatory movements towards negotiations and dialogue, and assured Mr. Chambas of Chad’s support and cooperation.

The meeting followed an earlier visit by Mr. Chambas to South Sudan as part of a tour of Sudan’s neighbours to underscore the importance of inter-regional cooperation in resolving the Darfur conflict not only for its people but also for the peace and stability of the entire region. 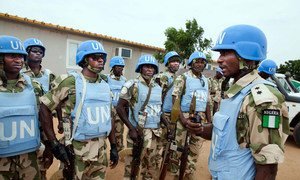 Secretary-General Ban Ki-moon and the head of the joint African Union-United Nations mission in Darfur have condemned an attack on Sunday in which one Rwandan peacekeeper was killed, and called on the Government of Sudan to bring the perpetrators to justice.