UNICEF/P. Esteve
A girl laughs during a skit on the prevention of HIV, at a youth centre in Moundou, Chad.

26 November 2013
Ahead of this year's World AIDS Day, the United Nations health agency has launched new recommendations to address the specific needs of adolescents – both those living with HIV and those who are at risk of infection – many of whom do not receive the care and support they need.

There are over two million adolescents between the ages of 10 and 19 years living with HIV, according to a news release issued by the World Health Organization (WHO), with millions more at risk of infection.

The failure to support effective and acceptable HIV services for adolescents, said the agency, has resulted in a 50 per cent increase in reported AIDS-related deaths in this group compared with the 30 per cent decline seen in the general population from 2005 to 2012.

“Adolescents face difficult and often confusing emotional and social pressures as they grow from children into adults,” says Gottfried Hirnschall, Director of WHO's HIV/AIDS Department.

“Adolescents need health services and support tailored to their needs. They are less likely than adults to be tested for HIV and often need more support than adults to help them maintain care and to stick to treatment,” Dr. Hirnschall adds.

The WHO recommendations “HIV and adolescents: Guidance for HIV testing and counselling and care for adolescents living with HIV” are being released in advance of World AIDS Day, observed annually on 1 December.

“Adolescent girls, young men who have sex with men, those who inject drugs or are subject to sexual coercion and abuse are at highest risk. They face many barriers, including harsh laws, inequalities, stigma and discrimination which prevent them from accessing services that could test, prevent, and treat HIV,” says Craig McClure, Chief of HIV programmes for the UN Children's Fund (UNICEF).

“About one-seventh of all new HIV infections occur during adolescence. Unless the barriers are removed, the dream of an AIDS-free generation will never be realized.”

WHO pointed out that many young people do not know their HIV status. For example, it is estimated that only 10 per cent of young men and 15 per cent of young women (15-24 years) in sub-Saharan Africa know their HIV status and, in other regions, although data is scarce, access to HIV testing and counselling by vulnerable adolescents is consistently reported as being very low.

The agency recommends Governments review their laws to make it easier for adolescents to obtain HIV testing without needing consent from their parents. The guidelines also suggest ways that health services can improve the quality of care and social support for adolescents. And they highlight the value of involving this age group to create an adolescent-centred approach to the services that work for people of their age.

To help health workers put the recommendations into practice, WHO has developed a new online tool which will be launched in January 2014 that uses practical examples from country programmes that are working closely with adolescents on HIV issues.

Last week, the Joint UN Programme on HIV/AIDS (UNAIDS) reported accelerated progress in combating the epidemic in much of the world, with significant decreases in new infections and deaths, but worrying signs persist that some regions and countries are falling behind in the global battle.

New infections globally were estimated at 2.3 million in 2012, a 33 per cent reduction since 2001 and AIDS-related deaths dropped by 30 per cent since the peak in 2005 to 1.6 million, as access to antiretroviral treatment expands, the agency said.

“Every person counts,” said Michel Sidibé, Executive Director of UNAIDS. “If we are going to keep our pledge of leaving no one behind – we have to make sure HIV services reach everyone in need.” 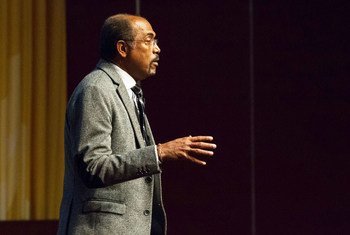 20 November 2013
The United Nations today reported accelerated progress in combating HIV/AIDS in much of the world, with significant decreases in new infections and deaths, but worrying signs persist that some regions and countries are falling behind in the global battle.