The agreement signed earlier this month between the United Nations refugee agency and the Governments of Somalia and Kenya supports the voluntary repatriation of Somali refugees, a UNHCR spokesperson has stressed, reiterating that the parties are not forcing anyone to return to Somalia.

Kenya hosts some 470,000 Somali refugees, the majority of whom are in the large Dadaab refugee camps complex in the north-east of the country.

“UNHCR works and speaks with the refugees daily, but this visit provided the refugees with an opportunity to ask high-level Somali officials about the areas to which they are considering returning – with some lively informal discussions in addition to town hall meetings,” the spokesperson noted.

The visit follows the 10 November signing of a tripartite agreement between UNHCR and the Governments of the two countries which laid out the framework by which Somali refugees in Kenya could return to their homeland.

It specified that all returns should be voluntary and take place in safety and dignity. In addition, it stressed that there would be no vetting of the refugees returning home, and no deadline set for the returns.

Implementation of voluntary repatriation will initially concentrate on supporting refugees who are spontaneously returning to Somalia. At the time of the signing of the agreement, between 30,000 and 80,000 Somali refugees had spontaneously returned to south-central Somalia since January, according to UNHCR figures.

The UN agency is preparing for pilot-projects in three potential Somali areas: Baidoa, Luuq, and Kismaayo.

In Dadaab, return help-desks have been established to provide refugees with information and assistance on repatriation to Somalia. 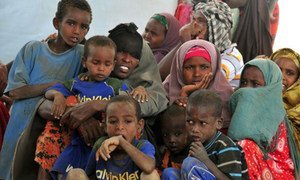 The United Nations refugee agency and the Governments of Kenya and Somalia today signed an agreement laying out the framework by which Somali refugees in Kenya could return to their homeland.