IRIN/Hannah McNeish
Thousands of people fleeing the Séléka alliance have made a temporary home of the Catholic mission in Bossangoa, Central African Republic (CAR).

25 November 2013
Citing mounting human rights abuses, sexual violence and other “horrors,” a top United Nations official today called on the international community for immediate action to halt the rapidly deteriorating situation in conflict-wracked Central African Republic (CAR), which, he said is “descending into complete chaos before our eyes.”

“It is critical for the international community and this Council to act now,” Deputy Secretary-General Jan Eliasson told the Security Council, proposing that a UN peacekeeping mission eventually replace the current African-led International Support Mission in the CAR (MISCA).

“We face a profoundly important test of international solidarity and of our responsibility to protect. We cannot look away. The situation requires prompt and decisive action to place protection of the people of the CAR up front,” he said, presenting a report from a technical assistance team that recently returned from the country.

Plagued by decades of instability and fighting, the CAR witnessed a resumption of violence last December when the Séléka rebel coalition launched a series of attacks, culminating in March when President François Bozizé was forced to flee.

“The population is enduring suffering beyond imagination,” Mr. Eliasson said. “As we see far too often, women and children are bearing the brunt. Human rights violations are mounting. The use of child soldiers is rising. Sexual violence is growing. There are widespread reports of looting, illegal checkpoints, extortion, illegal arrests and detentions, torture and summary executions.”

He noted that in a recent report Secretary-General Ban Ki-moon voiced particular concern at the alarming increase in inter-communal violence. “Harmony among communities has been replaced by horror,” Mr. Eliasson said, noting that manipulation of religious affiliations is fuelling never-before-seen sectarian violence between Muslims and Christians.

Former Séléka elements have been deemed responsible for most human rights violations against the civilian population, but there are also deeply worrying reports of abuses by “anti-Balaka”- increasingly well-organized self-defence groups - which may develop into a new rebellion, he added.

Mr. Eliasson stressed that humanitarian needs are escalating, with perhaps one out of three people in dire need of food, protection, health care, water sanitation and shelter, while access to people in need remains difficult and funding is woefully short, with a $195 million appeal less than half funded.

“The CAR is becoming a breeding ground for extremists and armed groups in a region that is already suffering from conflict and instability,” he warned. “If this situation is left to fester, it may degenerate into a religious and ethnic conflict with longstanding consequences, a relentless civil war that could easily spill-over into neighbouring countries.”

He noted that the African Union and the Economic Community of Central Africa States (ECCAS) both agree that there is an urgent need for the international community to act, and that a UN peacekeeping operation with a robust mandate will be eventually required.

The transformation of MISCA into a UN peacekeeping operation, with an estimated strength of 6,000 troops and 1,700 police personnel, would help lay the foundation for transparent, accountable, efficient and resilient institutions governed by the rule of law, he added, with the added advantage of ensuring a multidimensional, integrated approach and enhancing the international community’s ability to apply political leverage.

But such a change would require some lead-time for necessary preparations, Mr. Eliasson said. “We therefore urge the international community to support MISCA now in as comprehensive and predictable manner as possible, but also begin considering the possibility of a United Nations peacekeeping operation….

“Some call this a forgotten crisis. The world is haunted by the horrors of crises that we watched from a distance spiral into atrocities. We must never forget.”

Speaking to the press following his briefing to the Council, Mr. Eliasson said that is urgent to stabilize the situation, to stop the violence from spreading and reduce influence from the outside and, of course, protect civilians and to make possible humanitarian assistance which is urgently needed. “Above all, I hope that we will soon see presence on the ground that will stabilize the situation and prevent this conflict from getting out of control completely.”

The present forecast, he continued, is that there will a strengthened MISCA. There will also be contributions from Member States in agreement with the authorities in CAR, “but we have also been asked by several missions to start contingency planning for a possible UN peacekeeping operation, depending on the situation on the ground and of course in the end on the agreement of the Security Council.” 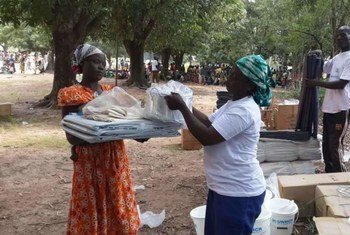 18 November 2013
A spate of armed robberies and extrajudicial killings, including those of army soldiers and a senior magistrate, has shaken Bangui, capital of the conflict-torn Central African Republic (CAR), for more than week, the United Nations reported today, calling on the transitional Government to bring the perpetrators to justice.