FAO/Sean Gallagher
Producer forest organizations can give their members better access to markets and a voice in policy development.

“Well-organized groups enable their members to have more bargaining power and get access to loans. Larger groups can lobby their members' interests and influence policies,” he said.

“In addition, through producer forest organizations smallholders can also strengthen the sustainable management of forests. Policy-makers should be more aware of these benefits and should support the creation of such organizations.”

Hundreds of millions of people depend on forests for their livelihoods, FAO pointed out in a news release. Despite these benefits, forest producer organizations, which are engaged in production of timber, non-wood products, handicrafts and medicinal plants, are not yet as common or well-recognized as similar groups in agriculture.

Farmers, especially indigenous peoples, smallholders, women and family farmers, benefit from managing forests as it enables them to diversify their income sources and offset the potential risks of relying solely on crops, the agency stated.

“When local people are given clear, fair and transparent rights to manage forests and to obtain economic benefits from them, they are more likely to make the long-term investments that forestry requires,” FAO said, adding that where they are confident that rights are safeguarded, local people can maintain and increase their traditional efforts to preserve forests.

The agency also stressed that women should have equal rights as producers, beneficiaries and decision-makers, and where this is not the case, forest producer organizations can have an important role in lobbying for change.

During the conference, which ends on Thursday, FAO launched a new report presenting a range of successful examples of forest producer organizations. One example is groups of tree planters in Guatemala that have cut out the middlemen who until recently took most of their profit. They now deal directly with large companies and receive more income from their sales. 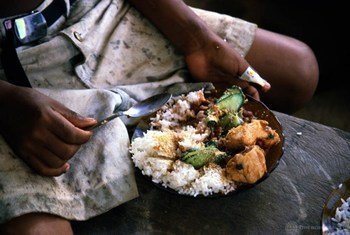 16 October 2012
Amid economic crises, climatic shocks, and high and volatile food prices in a world of plenty where nearly 870 million people still go hungry, the United Nations today marked World Food Day by highlighting agricultural cooperatives as vital weapon in the war on poverty and hunger.