UNHCR/B. Bannon
Climate change is a growing cause of displacement in Africa, where some areas have been devastated by drought.
23 November 2013

The United Nations-led climate talks in Warsaw, Poland, concluded today with an agreement that Secretary-General Ban Ki-moon called an important stepping stone towards a universal legal agreement in 2015.

“The Secretary-General welcomes the outcome of the UN Climate Change Conference that concluded today in Warsaw and he congratulates Poland for successfully hosting the Conference,” his spokesperson said in a statement.

The deal hammered out today ends two-weeks of talks between diplomats and environment experts representing more than 195 Parties to the UN Framework Convention on Climate Change (UNFCCC), the parent treaty of the 1997 Kyoto Protocol.

For the first time, the talks, which are also known as the Conference of the Parties or COP-19, included participation from the private sector, with a UN-business forum held on its sidelines.

The agreement lays the groundwork for a legally-binding treaty to be adopted in 2015, and enter force by 2020, which would cut climate-altering greenhouse gas emissions.

In today's statement, Mr. Ban welcomed the Parties' decision “to intensify immediate actions to fight climate change” and to come forward with their national contributions to the agreement well before its finalization in 2015.

The talks were made all the more urgent by the devastation in Philippines from Typhoon Haiyan that killed thousands of people and affected 13.25 million overall just as participants were arriving in Poland.

Today's deal comes one year before the 2014 Climate Summit that Mr. Ban said he would convene in New York in September during the General Assembly.

Mr. Ban has asked world leaders, as well as leaders from business, finance, local government and civil society, to bring bold announcements and actions that will lead to significantly reduced greenhouse gas emissions and strengthened adaptation and resilience efforts, his spokesperson said in reference to the 2014 summit.

“Much more needs to be done over the coming two years to achieve the ambitious agreement necessary to keep the global temperature rise below two degrees Celsius,” the spokesperson said in the statement. 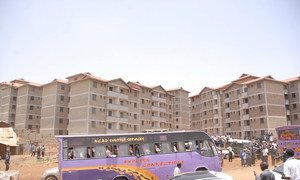 Secretary-General Ban Ki-moon took his campaign to galvanise an urgent global response to climate change to the world’s cities today, stressing that changes in urban planning, home building and transportation can usher in a low-carbon future that benefits both people and the planet.