At an interactive, webcast youth forum held in the UN’s Economic and Social Council Chamber on 18 November, students from Monmouth University, Lehigh University, the Global Education Motivators, CityKids and East Stroudsburg High School detailed some of their volunteer work aimed at empowering other young people through arts, education, mentoring, and community engagement.

Ahmad Alhendawi, the Secretary-General’s Envoy on Youth, urged students to be passionate about their volunteering and not see it simply as a stepping stone for their professional careers, “Nice resumes should be a reflection of your core values.”

In a question and answer session following the panels, the more than 100 participants and those watching via the internet asked questions in person and by email and included questions from UNAI member Pomona College in California.

Topics ranged from how to make students representing religious minorities feel more comfortable and connected with peers, to balance of power and gender equality.

Noorjahan Akbar, Glamour Magazine College Woman of the Year 2013, who led a grassroots campaign in her native Afghanistan against street harassment, and hopes to launch a women’s newspaper one day, also spoke with the students. She noted the importance of education and discussed some of the challenges keeping South Asian women out university classrooms.

Participants also heard from Maggie Betts, director and producer of the documentary ‘The Carrier’ about how a 28-year-old woman in Zambia and her community struggle to free their next generation from HIV and AIDS.

The event at UN Headquarters coincided with the third anniversary of the UN Academic Impact (UNAI).

Closing the discussion, chief of the UN Academic Impact, Ramu Damodaran called on the students present to “bring their tenacity and imagination” to effect change. He noted that “youth is the present generation. You are very much the present tense.”

Formally launched at UN in November 2010, UNAI is a global initiative that aligns institutions of higher education with the UN to actively support universally accepted principles in human rights, literacy, sustainability and conflict resolution, among others. It has nearly 1,000 members in 120 countries. 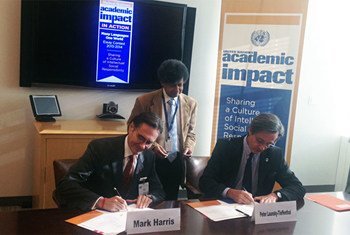 14 October 2013
The United Nations is asking college and university students to write an essay in one of its six official languages on the role of multilingualism in a globalized world.