On the 50th anniversary of the assassination of President John F. Kennedy, United Nations Secretary-General recalled his own “indelible” meeting as a teenager with the United States leader that inspired him to enter public service.

Mr. Ban was visiting the U.S. as part of a tour organized by the Red Cross for a group of young people from around the world who had won an essay contest in 1962 and were greeted by Mr. Kennedy at the White House.

“Meeting him was a turning point. His words that day on the South Lawn sparked my decision to become a diplomat and dedicate myself to public service,” Mr. Ban wrote in an opinion piece in the USA Today.

“As he looked out at our diverse group representing countries that were then on different sides of the Iron Curtain, President Kennedy reminded us that we could be friends even if our Governments were not. And he said the words I chose to live by: ‘There are no national boundaries; there is only a question of whether we can extend a helping hand.'”

Mr. Ban said one of his great personal regrets was not having better preserved the autograph he received from President Kennedy on that occasion. The signature was quickly dispersed among the many fingerprints of his friends who grabbed at the glossy White House Bulletin and passed it around “with such eagerness that by the time it returned to me no trace of his writing remained.

“But nothing could remove the imprint the American president made on my life,” he added.

He recalled the president’s great faith in the United Nations, recalling that his last speech to the General Assembly just weeks before his death “reads like a primer for addressing the problems that still plague us today,” stressing the indivisibility of human rights, opposing wasteful military spending, calling for racial and religious tolerance, and praising UN peacekeeping.

“In my own encounters with the world's young people, I try to deliver the message that JFK gave to me: Be a global citizen and love your country by serving the world,” Mr. Ban said.

♦ Receive daily updates directly in your inbox - Subscribe here to a topic.
♦ Download the UN News app for your iOS or Android devices.
global+citizen 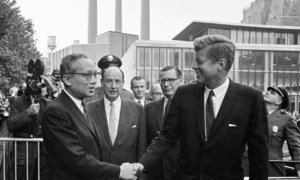