OCHA/Cpl Ariane Montambeault
Emergency Relief Coordinator Valerie Amos on a visit to the province of Capiz, Western Visayas, the Philippines, on 20 November, 2013.
22 November 2013

The United Nations today increased its appeal for Philippines typhoon relief by nearly 16 per cent to $348 million with a further rise likely as aid organizations move into top gear in the face of a disaster that killed thousands of people and affected 13.25 million overall.

“A massive disaster like this requires a massive response,” UN Humanitarian Coordinator Valerie Amos told a news conference at UN Headquarters in New York just back from her second visit to the area in a week following the devastation wrought by Typhoon Haiyan on 8 November.

“Much more needs to be done. Food, clean water and shelter remain the top priorities. Vast numbers of vulnerable people are still exposed to bad weather and need basic shelter. Families who have lost their homes will need substantial longer-term support from the international community to ensure they have the means to rebuild their houses.”

The Government today raised the death toll from Haiyan to more than 5,200 as it still tries to verify the total number of dead and missing, with communities on remote islands or in mountainous areas still not reached. Over 5 million of those affected are children, and more than 4 million people have been left homeless with over 1 million homes destroyed.

When it first launched its so-called flash appeal on 12 November, the UN sought $301 million, an amount that as of today is nearly 39 per cent funded at $134 million. Ms. Amos noted that the new amount of $348 million is expected to rise as there are still communities yet to be reached, and a major review of the appeal is slated for the first week in December.

“The logistical challenges have been enormous, with many roads blocked and airports unusable in the first few days,” she said. “The impact on essential services, hospitals, banks and markets, as well as the lack of fuel, transport, water and power, made it very difficult to scale up aid as quickly as was needed.”

Describing her latest visit, Ms. Amos added: “I have seen and heard harrowing tales of desperate need and profound loss. I also heard reports of immense bravery and heart-warming compassion.

“I saw how the international community pulled together with the communities and authorities to work out how to overcome major obstacles, and saw more and more people being reached with basic assistance.”

The UN World Food Programme (WFP) has reached over 2.5 million people with basic food aid, more than 130 local and foreign medical teams are providing emergency treatment, and thousands of tarpaulins and plastic sheets have been distributed, but vast numbers of vulnerable people are still exposed to bad weather and need basic shelter.

“I am very concerned that some 1.5 million children are at risk of acute malnutrition and close to 800,000 pregnant and nursing mothers need nutritional help. People living with chronic disease and other vulnerable groups need medication and specialist care,” Ms. Amos said.

She thanked the international community for its “great solidarity” with the Philippines people and donors for their generous and rapid response, but highlighted the global strain on UN supply lines in responding to multiple emergencies.

“We count on donors to help us rapidly address this shortage of supplies,” she said. “The people of the Philippines deserve our unwavering support as they survive this crisis, start rebuilding their lives and have hope for a better future.” 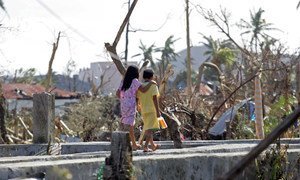