21 November 2013
Outlining the array of challenges faced by United Nations police in peacekeeping missions, top UN Police officials today stressed the necessity of increasing the number of women officers for success in fulfilling their mandates.

“We must have more female police officers among our blue berets,” Stefan Feller, Police Adviser in the UN’s Department of Peacekeeping Operations (DPKO) told correspondents in New York where police heads from UN missions worldwide have gathered to consider strategy issues.

“Promoting gender mainstreaming is more than just driving number,” he stressed. More women are important to help met the complex responsibilities of police in current missions, who, he said, are “our first line defence against chaos and instability and our first-line offense towards building safety, security and respect for the rule of law.”

“Just as important is the progress made towards ensuring that women are seen not just as victims, but as providers of safety and security,” he added.

Hester Paneras, Police Commissioner for the African Union - UN Mission in Darfur (UNAMID), the largest UN police operation with some 5000 officers, said that women police are particularly critical for mandate implementation in that troubled region of Sudan, where protection of civilians is a priority.

“The culture itself means that a woman will not easily speak to a man when they have been raped and been attacked,” Ms. Paneras said, noting that because of the conflict, women are often left on their own. “We need women who can give attention to the needs of these women.”

She said that although there were relatively few women UN police in UNAMID, given the vast territory they covered, they had already accomplished much. Beside their roles in security, they have helped women develop livelihood projects and gain self respect.

Women police, she said, were participating fully on the many levels of UN police responsibility in Darfur, from creation of a protective environment to helping to training domestic police to negotiating with the highest ranks of Government. The Bangladesh formed police unit – made up of all women – is performing, she stressed, “excellently.”

The officials noted that UN Police has set a target of 20 per cent women officers worldwide by 2014 in an initiative known as the “Global Effort,” pointing to the need for much more work to reach that goal.

Some peacekeeping missions are getting close or surpassing the goal, Mr. Feller said, noting that the police component in the UN mission in Cyprus, known as UNFICYP, now includes 22 per cent women, while the UN Mission in South Sudan (UNMISS) has 19 per cent female officers.

To continue build women’s representation in peacekeeping police, however, he said, it is also necessary to recruit more women in domestic police forces. He cited the example of Rwanda, from which 160 out of 380 police deployed globally were women. He partly attributed those numbers to the fact that Rwanda is constitutionally required to have 30 per cent women in its national police.

Despite their persistent efforts to mobilize more women police, neither Mr. Feller or Ms. Paneras minimized the sacrifices of being a UN police officer in peacekeeping missions, they said.

“In each Mission, I am reminded again and again: peacekeeping is not for the meek,” Mr. Feller said, paying tribute to the four UN police who lost their lives in Darfur since he took up his post this past May. 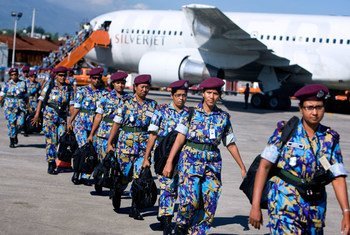 FEATURE: UN peacekeeping - on the front lines to end violence against women

8 March 2013
“I know what it means to lose your house, to be looted. To look a child in the eye and say, 'If they come for me, you need to run'," said the newly appointed United Nations Special Representative on Sexual Violence in Conflict. "I know what it means to give testimony and to investigate the documents.”