“There is little disagreement now about the nature of this scourge. It is extremism based on a perversion of religious belief, a fanaticism that abuses faith to justify violence against innocent civilians,” he said, speaking as head of the Tony Blair Faith Foundation, which provides practical support to prevent religious prejudice, conflict and extremism.

“We see it in the Middle East of course; in Central Asia; in many parts of Africa; most recently in the terrible events in Kenya; but also in countries in the Far East. And here in the USA, in the UK and most of Europe we have either experienced terrorism or are spending vast amounts of money, effort and energy to prevent it,” he told the UN Counter-Terrorism Committee Executive Directorate (CTED) at UN Headquarters in New York.

Mr. Blair stressed that it is not just a question of mere educational attainment but of educating but about diversity and difference, tolerance and respect, in the same way that the humanities, sciences and languages are taught.

Also addressing CTED, Secretary-General Ban Ki-moon’s Chef de Cabinet Susana Malcorra underscored the role education in countering extremist ideologies that provoke hatred and violence and opening the doors of understanding. “Sadly, we are all too aware of the dangers posed by violent extremism and acts of terror.

“The images have come to us at an almost incomprehensible pace: markets, schools, places of worship, neighbourhoods and communities torn apart by senseless acts of violence. We must work together for strategies to confront this terrible phenomenon – and, in particular, to reach young people and to help them see a world of fairness and justice, of opportunity and empowerment.”

Mr. Blair stressed that the soil in which extremists plant the seeds of hate “is the soil of ignorance, of warped thinking producing warped minds and in particular of a distorted and false view of religion. We will not deal with the root causes of terrorism unless we confront this fact.

“That is why in the 21st Century education is a security issue and not any education but education specifically that opens young minds to ‘the other,’ those who are culturally and religiously different, and shows them how the only future that works is one in which people are respected as equals whatever their faith or culture. ‘To see myself in you:’ peaceful co-existence should be our aim.

“It is time to mobilise and to organise to achieve this aim and as yet we are doing neither adequately or with the necessary urgency,” he added, calling for the UN Security Council to recognize this. “The extremists are able to organise because we are not organised. This has to change. We have to educate.”

Mr. Blair noted that his foundation’s Face to Faith schools programme emphasises the imperative that religion taught in the classroom be inclusive and mindful of the beliefs of all students.

At a later meeting with reporters CTED Executive Director Jean-Paul Laborde assured Mr. Blair of continued UN collaboration with his foundation in the interest of combating violent extremism.

Asked to speak about Islamists and terrorism, Mr. Blair replied: “This is most frequently viewed in relation to Islam, although I do think it’s important that we acknowledge that within other faiths as well, the Christian faith, the Jewish, Buddhist, Hinduism there can also be extremism.

“But sure, one of the reasons why it’s happening is the desire – by the way because many of the victims of terrorism are indeed Muslims – a desire to make sure that we put this issue out on the table and all of us work on achieving a change in the way that people view religion. 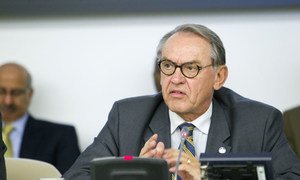 Deputy Secretary-General Jan Eliasson today stressed the importance of global efforts to cut off funding for terrorism while upholding United Nations values, including respect for human rights and the rule of law.