UN-Habitat/Nathan Kihara
Residents of Kibera Slum relocate to the newly constructed houses in Nairobi, Kenya. Cities have a major role in mitigating impact of climate change.

21 November 2013
Secretary-General Ban Ki-moon took his campaign to galvanise an urgent global response to climate change to the world’s cities today, stressing that changes in urban planning, home building and transportation can usher in a low-carbon future that benefits both people and the planet.

“Cities are engines of dynamism and creativity. In many respects, cities are the proving ground for our efforts to combat climate change, build resilience and achieve faster, more equitable development progress,” he told a high-level session of United Nations-led climate talks in Warsaw, Poland, devoted to the role of cities in controlling global warming and the other effects of climate change.

“Many of you in this room are working on the frontlines of climate change. We are all familiar with the challenges. Our shared responsibility is to turn them into opportunities.

By transforming how we plan our cities, build our homes and move our goods, we can usher in a low-carbon future that benefits people and the planet.”

With more than 50 per cent of the global population now urban and the proportion growing rapidly, especially in Asia and Africa, sustainable towns and cities offer substantial benefits for urban and rural areas alike, from energy and resource efficiency to public health and overall quality of life, he said.

Mr. Ban underscored the importance of cities across many dimensions, from energy and transport to water and sanitation to social cohesion and disaster risk reduction. “This complexity has made it difficult to channel urban issues into the climate discussion in a coherent way,” he said.

“Therefore I ask all of you to work with each other to ensure that we can do precisely that – and end up with results that are commensurate with the centrality of cities.”

The Secretary-General met with the representatives of various regional organisations and countries attending the Climate Change Conference, including ministers from the Alliance of Small Island States (AOSIS), the G-77 countries and China, the Africa Group, the BASIC countries (Brazil, South Africa, India and China), and the European Union.

In all these meetings he discussed the 2014 Climate Summit he will convene in New York in September during the General Assembly, and he emphasized the need for tangible progress in Warsaw in order to achieve an ambitious global agreement on climate change at the Climate Change Conference in Paris in 2015.

He particularly stressed the need to make progress on climate finance and to capitalise the Green Climate Fund and called for additional mitigation and adaptation measures, saying they are more urgent than ever.

In a related development the UN Environment Programme (UNEP) today announced the official opening of the Climate Technology Centre and Network (CTCN) to help developing countries make informed decisions about mitigation and adaptation technologies that suit their needs.

“As nations put in the foundations, walls and ceiling of a new, wide-ranging and universal climate agreement, the Climate Technology Centre and Network represents a further building block towards that low-carbon future,” UNEP Executive Director Achim Steiner said.

UNEP also noted that reducing emissions of nitrous oxide (N2O), an often-overlooked yet potent gas that could nearly double by 2050, potentially undermining gains in ozone layer recovery and exacerbating climate change, could bring benefits worth over $160 billion annually across diverse economic sectors by boosting efficiency in agriculture, by far the largest source of human-induced N2O.

This means improving the ability of crops and livestock to better utilize nitrogen, and minimising the loss of nitrogen to the environment that occurs during crop cultivation and animal production.

UN General Assembly President John W. Ashe, who is also attending the Warsaw Conference, is meeting with a series of officials and national ministers to discuss ongoing efforts to forge agreement on combating climate change.

Yesterday he conferred with French Development Minister Pascal Canfin. He also discussed the climate negotiations with the Executive Secretary of the UN Framework Convention on Climate Change (UNFCCC), Christiana Figueres. 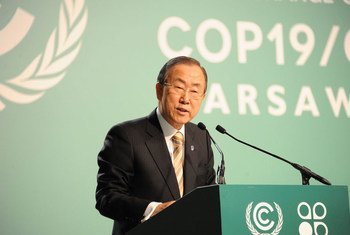 20 November 2013
The top United Nations official today called on foreign ministers to prioritize the environment in domestic politics and contribute to climate financing as a way of moving towards a new global climate change agreement by 2015.