Marking World Philosophy Day, the head the United Nations Educational, Scientific and Cultural Organization (UNESCO) today appealed to every professional, author and teacher worldwide to unleash the power of critical thinking, and urged the international community to engage in reasoned dialogue to help find common solutions to shared challenges.

“This day is an invitation to rethink the conditions for inclusion and sustainability in societies that are increasingly diverse and ever more interconnected, between themselves and with their environment,” said UNESCO Director-General Irina Bokova in her message for the Day, which this year in on the theme “Inclusive Societies, Sustainable Planet.”

She said that in this world of many ramifications, sustainable development depends first on prosperity shared between States and within societies. “In a world of diversity, inclusion comes more than ever from dialogue and respect for justice, human dignity and human rights,” Ms. Bokova added, recalling the message of Swami Vivekananda: “Rise at the expense of another! I did not come to earth for that!”

“In a world of multiple fractures, philosophy plays an indispensable role to think and act for human dignity and harmony,” she said, noting that philosophy also reminds us that the resources of the mind “are the only real renewable resources we have.”

At UNESCO Headquarters in Paris, the celebration of the Day will be marked by the organization of a round table on the theme that will feature distinguished philosophers and scholars, including Ms. Tanella Boni (Côte d'Ivoire), Ioanna Kuçuradi (Turkey) and Yves Charles Zarka (France).

Opened by Ms. Bokova, this round table, moderated by Ali Benmakhlouf (Morocco), Professor of Arab Philosophy at the University of Paris-Est Créteil Val de Marne, will be directly related to a subject which is at the heart of public debates around the world and within the UN: the growing inequalities between rich and poor within many countries and between countries and sustainable development.

Participants will discuss the concepts of social justice, solidarity, exclusion and inclusion in different societies, as well as issues related to the vulnerability of various groups - including women, children, young people, people with disabilities, minorities, indigenous peoples, migrants, refugees, people living in poverty - and the interfaces between these issues and sustainable development.

♦ Receive daily updates directly in your inbox - Subscribe here to a topic.
♦ Download the UN News app for your iOS or Android devices.
education|culture 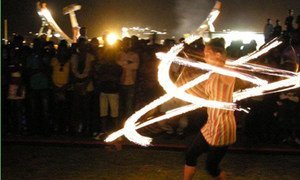