Pierre Krähenbühl of Switzerland, currently Director of Operations at the International Committee of the Red Cross (ICRC), overseeing 12,000 staff in 80 countries, succeeds Filippo Grandi of Italy as Commissioner-General of the UN Relief and Works Agency for Palestine Refugees in the Near East (UNRWA).

Prior to his current Red Cross post, he served as personal advisor to the President of the ICRC (2000-2002), carrying out various field assignments in El Salvador, Peru, Afghanistan and Bosnia-Herzegovina, and before that he was Head of Operations for Central and South-Eastern Europe.

Established by the UN General Assembly in 1949 after the 1948 Arab-Israeli conflict to carry out direct relief and works programmes for Palestine refugees, UNRWA currently provides services including education, health, social safety net assistance and micro-financing to some 5 million Palestinian refugees and their descendants in the West Ban and Gaza, Jordan, Lebanon and Syria. 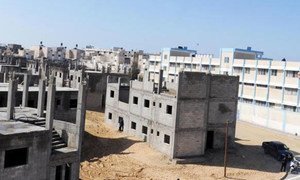 The United Nations agency providing protection and assistance to some five million Palestinian refugees is facing a cash deficit that threatens to bring its operations to a standstill, its chief has warned, appealing to both traditional and new donors to step up support.