20 November 2013
International humanitarian assistance is crucial to help the world’s youngest nation tackle a range of challenges, including food insecurity, inter-communal violence and flooding, a top United Nations relief official said today as she wrapped up her visit to South Sudan.

“Though the overall humanitarian situation has improved in several areas of South Sudan in the past year, millions of people are still in dire need of help,” said Deputy Emergency Relief Coordinator Kyung-wha Kang.

Ms. Kang, who is Assistant Secretary-General in the Office for the Coordination of Humanitarian Affairs (OCHA), visited the country from 17 and 20 November, and discussed with Government officials and humanitarian partners how aid operations can save lives while helping to build the resilience of communities.

“Throughout my engagements, I offered support to humanitarian workers who have worked tirelessly in one of the world’s toughest environments, to deliver life-saving aid to people affected by food insecurity, armed hostilities, inter-communal violence and flooding across the country,” she said in a statement issued to the press in the capital, Juba.

Ms. Kang noted that violence in the eastern state of Jonglei has displaced tens of thousands of people, who need protection, basic services, and access to safety and security so that they can resume their livelihoods.

Just last month, over 40 people were killed and more than 60 wounded in inter-communal violence in the state in Jonglei. Sporadic ethnic violence is one of the challenges South Sudan has been dealing with since achieving independence in July 2011.

In addition, recent months have witnessed severe flooding in several areas that left over 150,000 people in need of humanitarian aid.

“I must stress that this is important for humanitarians to be able to support the Government of South Sudan in developing disaster risk reduction and preparedness strategies, and in helping to improve the resilience of local communities, with particular focus on enabling women to fully participate in decision-making processes,” said Ms. Kang.

During her visit, she also emphasized the need to focus on resilience and long-term recovery, including taking advantage of the fertile soil which South Sudan is “much endowed with.”

“I also stressed the need to ensure that children have access to education, and that the work of humanitarians in providing emergency education and psychosocial support, particularly for young women and girls, is imperative to ensure that this country’s most vital resource is protected and nurtured.”

She also noted that humanitarian partners, working closely with national authorities, have recently launched a new Consolidated Appeal for 2014-2016 that prioritizes saving lives in emergencies, building community resilience and strengthening national capacity to deliver basic services. The appeal seeks $1.1 billion to meet the needs of 3.1 million people in 2014.

“I appeal to all donors and partners to stand together with the people and the Government of South Sudan in this time of need.” 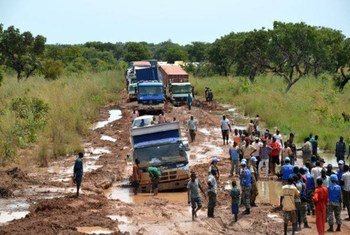 28 October 2013
Humanitarian agencies and their partners have reached nearly 100,000 of the 156,000 people affected by flooding across South Sudan over the past couple of months, according to a senior United Nations relief official in the country.