There should be a greater emphasis on job creation in the world’s 49 poorest nations, where the number of young people of working age is increasing by 16 million per year, says a new report released today by the United Nations Conference on Trade and Development (UNCTAD).

The LDC Report 2013 recommends that the Governments of these countries intensify efforts to employ this vast resource – which is currently largely underemployed, or trapped in vulnerable, low-paid jobs – to improve prospects for economic progress.

It calls for a break with “business-as-usual” policies, and a shift towards policies aimed at spurring inclusive growth and the creation of more and better quality jobs.

“Given the clear demographic challenges, the LDCs will need to make significant efforts to generate a sufficient quantity of jobs and offer decent employment opportunities to their young population,” said UNCTAD.

“If this is not achieved, the likelihood is that poverty, social instability and international emigration rates will rise.”

The report cautions that while LDCs enjoyed relatively high gross domestic product (GDP) growth rates from 2002 to 2008, economic progress did not translate into correspondingly increasing levels of employment. In fact, the countries with faster GDP growth had relatively lower employment creation.

UNCTAD notes that demographic trends in the LDCs are such that millions of new jobs will have to be created every year over the coming decades. For example, in Niger there were 224,000 new entrants into the labour market in 2005 – a number that is expected to increase fivefold, to 1.4 million, by 2050.

The report says that the world’s LDCs should take steps to improve GDP growth, through the generation of employment that pays a living wage and has safe working conditions, and through investment to develop productive capacities. 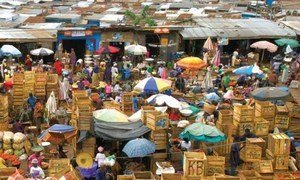 Some of the world’s poorest countries have made impressive gains in the fight against poverty, but the least developed countries still lag in efforts to improve living standards, the United Nations said today in a report showing significant overall progress towards achieving the global targets against extreme poverty.