19 November 2013
The world need look no further than the catastrophe in the Philippines to comprehend the profound and dangerous consequences of a warming planet, Secretary-General Ban Ki-moon warned today, urging negotiators at a United Nations conference in Warsaw to rise to the challenge “with wisdom and urgency” and pave the way to a binding climate deal by 2015.

“Climate change threatens current and future generations,” Mr. Ban said in his address to the high-level segment of the United Nations Conference on Climate Change, taking place in Poland.

Extending his deepest condolences to those affected throughout the Philippines by Typhoon Haiyan, he said that all around the world, people now face and fear the wrath of a warming planet. “The science is clear. Human activities are the dominant cause of climate change. We cannot blame nature.”

Indeed, greenhouse gas emissions continue to rise and the consequences are profound, dangerous and known to all, the Secretary-General said, recalling a visit earlier this year to Iceland where the rate at which the glaciers are melting is among the fastest in the world. “I was told if we do not take urgent action now Iceland may be a land without ice soon.”

Offering another sobering example, Mr. Ban said that earlier this month he visited the Sahel, together with the President of the World Bank, and had witnessed climatic conditions – including extreme drought – undermining the region’s development and security.

“All of us in this room share a momentous responsibility. We must rise to these challenges with wisdom, urgency and resolve to address climate change,” he said, expressing deep concern that the scale of efforts being undertaken by the international community are still insufficient to limit global temperature rise to below 2 degrees Celsius from pre-industrial levels.

But the UN chief said that he is also hopeful because there has been progress on multiple fronts towards a low-carbon future. Governments, business, community groups, women, youth and indigenous leaders are building collective capacity. New programmes for sustainable cities and climate-smart agriculture are delivering benefits of people and the planet, and global demand for renewable energy continues to rise very sharply.

“We now know it is possible to close the emissions gap. We must build on this momentum,” he said, stressing that the United Nations, for its part, is engaging on many fronts including “Greening the Blue” by reducing the Organization’s footprint and working towards climate neutrality.

Noting that delegations in Warsaw have agreed to finalize an ambitious global legal agreement on climate change by 2015, Mr. Ban acknowledged that there is “a steep climb ahead” and called for action in four areas: swift ratification by all countries of the second commitment period of the Kyoto Protocol; stepping up on finance, including long-term finance and the Green Climate Fund; agreeing a comprehensive action agenda to meet the climate challenge; and laying firm foundations for the 2015 agreement.

“Success in Paris means bringing substantive progress to Lima. That means [in] Warsaw here we have to build a crucial stepping stone,” he said, looking ahead to the next meetings of States parties to the UN Framework Convention on Climate Change (UNFCC).

The Secretary-General drew attention to the climate summit he intends to convene on Tuesday, 23 September 2014, ahead of the opening, next year, of the annual General Assembly debate. That meeting is meant to complement the UNFCCC process and to be a “solutions summit,” not a negotiating session. “This will be a complimentary session to the ongoing UNFCCC negotiation process,” he said.

Inviting to this summit Heads of State and Government along with leaders from finance, business community, local government and civil society, he urged all to bring “bold and new announcements and action. We need your political leadership at this crucially important time.”

“I urge you to think in terms of your legacy,” said Mr. Ban adding: “Let us work together…to make this world better for all. Let us shape this future, our own future for all succeeding generations and environmentally sustainable planet Earth.”

In his remarks to the Conference, General Assembly president John Ashe urged negotiators to be realistic, telling them they cannot afford to ignore the harsh realities that the climate change challenge brings to the overall task of sustainable development for all. “We have now entered the era of super storms, and the human tragedies and ravages such storms and typhoons bring are part of our daily vernacular.”

“However, we in this room must never ever become inured to this. What is the point of focusing on providing jobs, livelihoods, education, and healthcare, if one storm – or maybe future super storms - wipes it all away in a few hours?” he asked, adding: “ We, all of us in this room, who represent the UN family, must reach an agreement by 2015. Period.”

Telling the Conference that “the clock is ticking,” Mr. Ashe said the time has come for Governments to stand up and say, “yes we will. Yes, we will do something. We will act. Not tomorrow, not next week, but right here. Today.”

He noted that recent catastrophic events have made it all the more obvious that action is needed. They require, he said, resolute measures and a vision well beyond the usual political posturing along with a political willingness to look beyond particular narrow interests and focus instead on the common good for all. 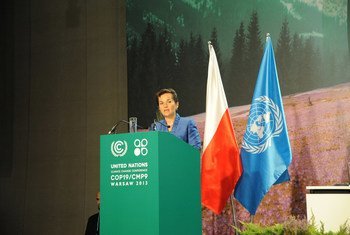 11 November 2013
The United Nations Climate Change Conference opened today in Warsaw, Poland, with a call to reach a new agreement to cut climate-altering greenhouse gas emissions during what is seen as a pivotal point in the negotiating process, made all the more urgent by the devastation in Philippines from Typhoon Haiyan.